Add that to the checklist! A new wasp for Ireland.

First record for a new wasp species to be found in Ireland.

An additional species of wasp has been recorded in Ireland for the first time. That might strike fear in the eye of any summer BBQ goer who associates all wasps with our commonly recognised ‘yellow-jacket’ wasps but fear not, there is no ‘sting’ in the tail of this news story. This instead is yet another new exciting species find for Ireland that may actually highlight that ‘good’/benefical insects can migrate to Ireland as well as ‘bad’.

Wildlife enthusiast and farmer John Fogarty who has a special affinity for recording Ireland’s invertebrate community made the find on a local conifer plantation, just east of Horse and Jockey in Co. Tipperary in the latter half of August 2017. This new arrival is known by its latin species name Ibalia leucospoides, a species found elsewhere across Eurasia and North America. John explained, “I was looking for Woodwasps at the time, a species I have yet to see, (when he then) saw this odd looking ‘fly’. I thought it was moving rather industrially along the log”.

John who was without his net at the time managed to capture some photographs of the individual which were hugely valuable in the validation process. After posting on some online forums, a helpful reply from Eric Eaton pointed John in the direction of Iballidae. Matt Buffington from the USA and Gavin Broad from the UK were able to validate the species by comparing photos to specimens in the Smithsonian Institute Natural History Museum and the Natural History Museum in the UK respectively. Once Tomás Murray of the National Biodiversity Data Centre cross checked the species with the Irish Hymenopteran Checklist it was confirmed as a first record for Ireland.

Its occurrence here increases the total number of our Hymenopterans (ants, wasps, bees and their relatives) known to occur in Ireland to 3195 species. Of this sizeable group, Ibalia leucospoides is part of a sub-category of parasitic Hymenoptera. Thus, females of this species of solitary parasitoid wasp use their ovipositors (specialised structure for depositing eggs) to pierce the body’s of other insects to lay their eggs there. The young spend the inital parts of their life cycle within their host species, before emerging to begin their transition into their adult forms.

This species known to parasitise at least 11 woodwasp species (Sirex and Urocerus) that are considered pests of pine forestry worldwide. Ibalia leucospoides has thus been introduced widely to the Southern Hemisphere as a form of biocontrol where non-native pines are planted and have experienced damage by Sirex noctilio. Therefore, it may be an economically beneficial insect in Ireland too.

The finding of this species for the first time in Ireland highlights the importance of our invaluable recording community across the island. Tracking and monitoring change in our environment is critical in understanding how and why it is changing, and what we should be doing to conserve it. If you want to make a record of a species that you have identified, you can report sightings here: https://records.biodiversityireland.ie/.

For any questions or queries that you have for staff of the National Biodiversity Data Centre, send them in via email to: info@biodiversityireland.ie. Alternatively, you can reach us on Facebook or Twitter. 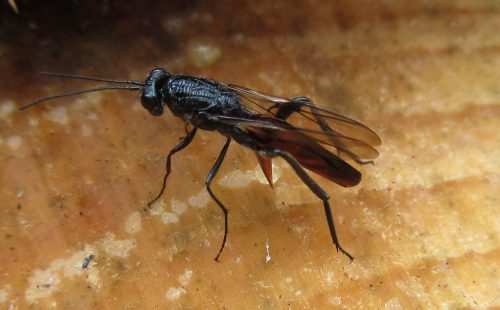