Congratulations go to Laois for the 2nd year running for coming top of the table of counties recording butterflies during this the 2019 Butterfly Bash.  As you’ll see from the top 10 table below, across counties support for the Butterfly Bash effectively doubled this year and this was reflected in the overall tally of 3324 records collected by 351 recorders across Heritage Week this year compared to 1740 records by 187 recorders last year!  A sincere thank you to everyone in achieving this is an amazing level of recording over such a short period of time and for your generous contribution to the Butterfly Atlas 2021.  Last year was an excellent year for Irish butterflies with populations up by 29% on previous years, so it’s an even greater achievement that double the number of butterfly records were submitted this year.

As with last years Butterfly Bash, the aim is to encourage a last flush of butterfly recording before the season begins to wind down and stimulate recording in areas where we currently lack records.  Again, the wonderful network of butterfly recorders failed to disappoint with over 170 records across 15 previous ‘gap’ 10 km squares collected across the week, with John Dick topping the table for the greatest percentage change in square G32.  Des Finnamore, Amanda Pedlow and Liam Lysaght also deserve a special mention as they appear on both tables: not only did they record a significant number of butterflies but also did so in previously under-recorded areas.

The mix of species recorded also reflects the significant increase in migratory species like the Painted Lady and Red Admiral seen this year.  Being large, apparent and easy to identify Peacocks have topped the table this year, so we’ll have to wait until this years Butterfly Monitoring Scheme results are released to see if this reflects real change.  However, their populations have increased by 196% over the past 11 years in Ireland and it’s a species projected to expand its northerly distribution across Europe with ongoing climate change. 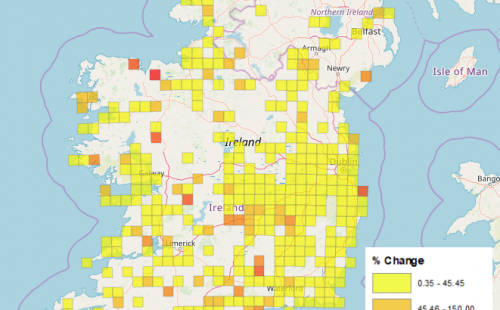