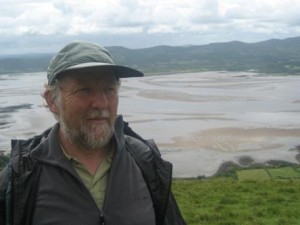 Having spent several years working and studying in the UK Don came to Ireland in 1976 to work as a post-doc in UCD in the field of soil invertebrate ecology.   Declan Doogue was a great inspiration and contact around this time and through him Don became involved in the Irish Biogeographical Society and the Dublin Naturalists Field Club. His involvement with the Irish Biogeographical Society was seminal in focussing naturalists like Don to record flora and fauna.

Don’s recording career began with woodlice, earthworms and other invertebrates such as Odonata and Orthoptera. He carried out a methodical study of the Odonata of Dublin and Wicklow (1978-1980) and reviewed all Irish Orthoptera records. Records during this period were written on “Cope-Chat punched cards” and in field note books.

In early 1977 Don was acquainted with John Lovatt and became involved in Irish Wildbird Conservancy and in wetland bird counts for Lough Derravaragh, Co Westmeath.  He founded  a young ornithologists movement and was invited on to the Council of IWC 1979-1981.

In 1981 he moved to Sligo to lecture in Ecology and Geology at the Regional Technical College and played a key role in developing an Hons Degree Course in Environmental Science & Technology. At this point his recording focus changed to specialising in all aspects of the natural history of  Sligo and Leitrim. During his first 5 years in Sligo he was involved in special surveys of Odonata, Lepidoptera, Orthoptera and Ornithology and established an IWC Sligo Branch doing wetland bird surveys and flora and invertebrate studies. Some of the main recording initiatives he was involved in over the next number of years were:

In 1995 Don established a computer database for his species records which was one of the first PC based amateur databases to be established in Ireland.  He extended the computerisation of his records in 2000 with a references and habitats database for Sligo and Leitrim.

Don was  founder member of the Irish Whale & Dolphin Group and its first Chairman in 1990. He was the Botanical Society of British Isles (BSBI) County Recorder for Leitrim (1997-2012) and nominally for Sligo (1997-2001) during the years of the ‘New Atlas of the British and Irish Flora’. He is the current BSBI County Recorder for Sligo.

Don served on the Board and the Editorial Committee of the Irish Naturalists’ Journal and also served 3 years as Chairman of INJ. He currently serves on the following committees: Praeger Committee (RIA);  Sligo Heritage Forum (Sligo Co.Co.); Wildlife Committee (Heritage Council).