Many experts have generously given their time to long recording days in Ireland helping to train Irish bryologists. The bryology community has provided inspiration, support, training and friendship. 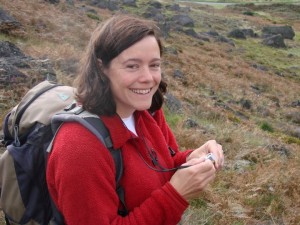 Dr Joanne Denyer is one of Ireland’s few bryophyte specialists. Jo has made a significant contribution to our knowledge of bryophyte distributions in Ireland and worked across Ireland to enthuse others about bryophytes and their recording. She was inspired to take up botany by Professor Clive Stace whilst she was an undergraduate at Leicester University. Whilst later completing a DPhil in Plant Ecology at the University of Sussex, she had her first encounters with bryophytes. Rod Stern encouraged her to join the British Bryological Society (BBS) and her interest in bryophyte grew from there. When she later moved to the Macaulay Institute in Aberdeen, to work on upland plant communities, she continued to develop her bryophyte knowledge through BBS field meetings, courses and self-teaching.

In 2008, Jo moved to Ireland to work as an ecological consultant and quickly became involved in leading bryophyte field meetings for the Dublin Naturalist Field Club (DNFC). The Heritage Council, BBS and DNFC supported two bryophyte recording projects she ran in 2010 and 2012 in Counties Wicklow and Kildare. The aim of these projects was to collect data in under-recorded areas and to train beginner bryologists to identify and record bryophytes. During this time she also founded the BBS Irish bryophyte group, which aims to develop bryophyte expertise in Ireland though field meetings and knowledge sharing. There is an annual programme of field meetings and an Irish Bryophyte Facebook page to share news and event details. She also helped to establish a network of BBS Regional Recorders in Ireland and there are now recorders for ten vice-counties. Jo regularly organises formal and informal recording meetings for the BBS in Ireland and Northern Ireland. From 2009 to 2013 this was focused on collecting data for the New Atlas of British and Irish Bryophytes, which is due to be published in November 2014. These meetings have resulted in nearly 60,000 bryophyte records, including over 1,000 New Vice County Records.

Jo currently works as an ecological consultant (Denyer Ecology), specialising in botany and bryophytes. In addition to consultancy work, she trains Ireland’s next generation of bryologists by lecturing in bryology at National University of Ireland, Galway and University College Dublin and is a Visiting Research Fellow at Queen’s University, Belfast. She is the BBS Regional Bryophyte Recorder for Counties Wicklow and Kildare, the BBS Irish Conservation officer and a member of the BBS Conservation and Recording Committee. She regularly provides bryological training courses in Ireland for amateurs and professionals.

None of this would have been possible without the support of BBS bryophyte experts and the dedication of Irish bryologists (in particular Neil Lockhart, Maurice Eakin, Rory Hodd and George Smith). Many experts have generously given their time to long recording days in Ireland helping to train Irish bryologists. The bryology community has provided inspiration, support, training and friendship.