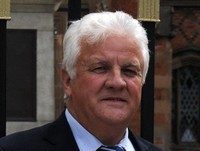 Dr Roy Anderson is Ireland’s leading authority on terrestrial invertebrates (in particular beetles and molluscs) and fungi. He has published over 200 papers and authored six books on Ireland’s biodiversity on top of contributing over 80,000 distributional records to CEDaR covering a wide range of groups including beetles, molluscs, fungi and millipedes. He has developed websites such as the Ground Beetles of Northern Ireland and MolluscIreland and novel online identification keys. Roy is also a talented wildlife photographer.

Despite his huge contribution and dedication to the understanding of Ireland’s biodiversity, Roy’s professional career was as an agricultural chemist. His degree and doctorate are both in chemistry and from 1978 until his retirement, Roy worked for the Department of Agriculture Northern Ireland as a lecturer in Queens. His professional research focused on ruminant nutrition and soil chemistry and he has published widely on these subjects.

Roy has given his time, energy and expertise to increasing the knowledge of Ireland’s biodiversity and has always been extremely supportive of young naturalists. Roy’s substantial contribution to entomology has been recognised by the Royal Entomological Society who awarded him a fellowship in 2007. He is also currently the honorary editor of the Journal of Conchology.