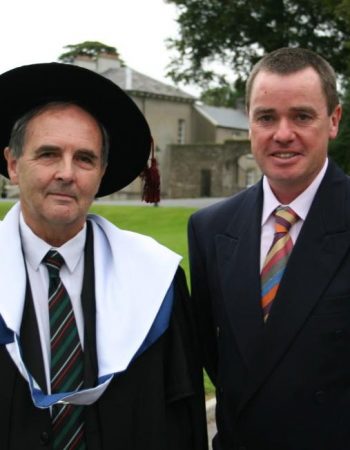 Ken. G.M. Bond (left) with Dr. Liam Lysaght on the occasion of being awarded the Distinguished Recorder Award 2008 and conferred as a Fellow of Waterford Institute of Technology.

Ken. G.M. Bond (left) with Dr. Liam Lysaght on the occasion of being awarded the Distinguished Recorder Award 2008 and conferred as a Fellow of Waterford Institute of Technology.

Ken Bond is Ireland’s leading authority on Lepidoptera (butterflies and moths), having spent almost 40 years surveying and recording moths and butterflies for all counties in Ireland. During this time, he has amassed a database of 50,000 records on butterflies and moths, making a huge contribution to our understanding of Irish Lepidoptera. At the European level he is recognised as a leading regional authority on moths, being particularly expert on the taxonomy of some of the moth groups usually referred to as micro-Lepidoptera.

Ken began studying moths and butterflies in 1970, when he was working as a metrological recorder at the Isle of Man. Ken move back to live in Dublin in 1980, where he was awarded a BSc in Zoology at Trinity, as a mature student. Following his degree, Ken commenced further studies at University College Cork working on the taxonomy of the larvae of Phyllonorycter, a particularly complicated group of leaf-mining moths. He is still based in Cork.

Ken has published more than 3O papers on various aspects of Lepidoptera, including accounts of species which were unknown for Ireland until his discoveries. He was also one of the main Irish contributors to the landmark, eleven volume publication The Butterflies of Great Britain and Ireland (Emmet, A.M. & Heath, J. (Eds.) 1990)

Ken worked originally as a metrological recorder in the Isle of Man in the 1970s, and since then has retained his knowledge and interest in meteorology. He has given lectures on meteorology to third level students, and while on fieldwork is a constant source of information on the changing weather systems.

In addition to his scientific endeavours, he is a skilled linguist.