During this period it became clear that regular, year-round land based watches were an ideal way to monitor the inshore movements and seasonal abundance of cetaceans in Irish waters. 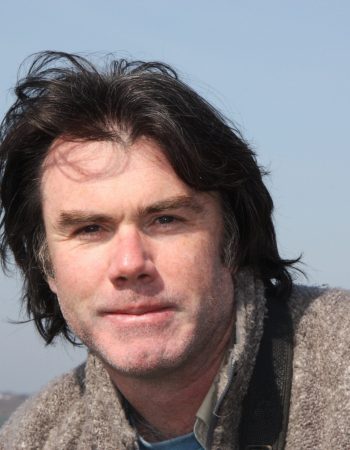 Pádraig Whooley is perhaps an unlikely recipient of the Distinguished Recorder award, coming from a commercial background with his early career in shipping (1987-1995) and later having worked in a corporate sales environment with Dell Computers (1996-1999). So this award is an acknowledgment of the role Citizen Science has in biological recording schemes, and specifically how the Irish Whale and Dolphin Group’s recording schemes have in so many ways led the way in making such schemes accessible to a wider public audience.

Pádraig’s first involvement with the fledgling Irish Whale and Dolphin Group (IWDG) dates back to 1992, when he saw a poster in Bray train station for one of the group’s early meetings in Trinity College. Intrigued to learn that not only were there were whales in Ireland, but that there was an organization interested in them, he attended, and the rest is history.

In 1995 Pádraig embarked on a year’s overseas travel in search of whales, during which he worked as a warden for BC Parks on the Robson Bight Ecological Reserve for killer whales on Vancouver Island. His travels have also taken him on many occasions to the Baja Peninsula, in Mexico, as well as Patagonia, Chile, and Southwest Africa. These early travels gave Pádraig invaluable field experience, which would stand to him when his focus later shifted to Irish waters.

Pádraig has held several positions within the IWDG: group secretary (1996), membership officer (1997) and sightings co-ordinator 1999 (to date).  He settled in Cork in 1999, where he completed a two year Diploma in Field Ecology in UCC (2000-2003). Padraig spent much of the next decade carrying out systematic land-based watches from sites such as the Old Head of Kinsale in Co. Cork. This early body of work helped highlight the importance of places like West Cork as a feeding area for fin and humpback whales. During this period it became clear that regular, year-round land based watches were an ideal way to monitor the inshore movements and seasonal abundance of cetaceans in Irish waters.

Under the auspices of ISCOPE (Irish Scheme for Cetacean Observation and Public Education) 2003-2009, IWDG promoted active participation in cetacean recording. During this period, Pádraig and colleagues Simon Berrow and Mick O’ Connell travelled nationwide presenting at walks, talks and workshops and engaging with interested individuals and groups who could contribute cetacean sighting and stranding records to the IWDG. The validation process increased considerably the value of these records, which were databased and made accessible for online interrogation on www.iwdg.ie making this a unique resource at the time.

With family and work commitments Pádraig doesn’t get to spend as much time these days up on the cliff tops of West Cork with his scope and binoculars as he might like, but remains an avid recorder and an advocate of sustainable Whale Watching in Ireland.  Pádraig is a regular contributor to a range of Irish natural history publications, media and wildlife documentaries and continues in his role as IWDG Sightings Officer.