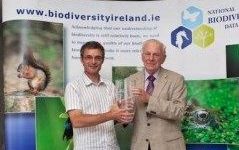 Paul Green was born in Surrey but moved at an early age to Somerset. Paul displayed an interest in plants from a very young age. Inspired by both his mother and grandmother this developed into an obsession by his teenage years.

Throughout the decade of his twenties Paul and his brother Ian worked on Atlas Flora of Somerset. It was published in 1997 and is a highly regarded county flora that won the Botanical Society of the British Isles (BSBI) and Wildflower Society President’s prize for the best botanical work published that year.

In the 1990s Paul came to Ireland to assist with the BSBI New Atlas project. He quickly came to love Ireland and settled here, where he is now the Vice County Recorder for both Co. Waterford and Co. Wexford.

In 2007 Paul approached the National Biodiversity Data Centre and requested that a copy of the plant dataset he had established for County Waterford is stored by the Centre and that his data be publically displayed through the Centre’s web GIS mapping system. To enhance this generous sharing of knowledge, the Data Centre developed a web version of Paul’s Flora of County Waterford to bring his work to wider audiences. This is the first web flora for a county published in Ireland or Britain, and since its launch in 2008 it has received over 180,000 hits, and is now averaging 35 visitors a day. Paul is a remarkable botanist who generously shares his knowledge and time. He has made an outstanding contribution to our knowledge of Ireland’s plants.