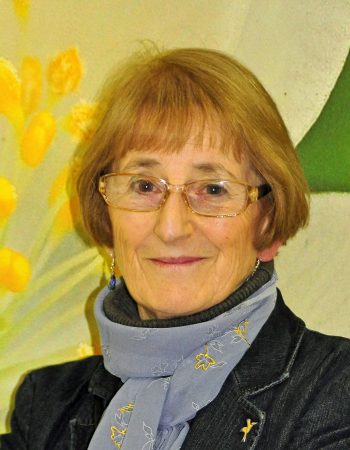 The recipient of this year’s Distinguished Recorder Award is Zoë Devlin for her contribution to promoting the recording of Ireland’s wildflowers, and for producing a suite of Irish identification aids to encourage new recorders.

Zoë’s lifelong love affair with wildflowers began at a very early age when she developed a love of the little ‘weeds’ which grew between the rows of peas and spinach in the vegetable part of the family garden close to the village of Dundrum.

On frequent family visits to relatives in Co. Wicklow she received great encouragement to pursue her passion. A cousin of her father’s, Dr Kathleen Lynn was the person who first showed her an orchid through her large magnifying glass in what could be described as a ‘defining moment’, spurring her on in her desire to learn as much as she could about the natural world.

In the late 1950s, when Zoë finished secondary education, she trained in secretarial work and spent most of her working life as a secretary. But the interest in nature continued to grow and was joined by another. This was photography.

Zoë wanted to learn more about botany – books weren’t enough – so she attended extra-mural courses in UCD and lectures and workshops at the National Botanic Gardens. Zoë began to photograph each new species she found and soon built up records and when she retired from the ‘day job’, her daughter suggested she set up a website of those records. In 2009, www.wildflowersofireland.net went live.

Shortly after, the Collins Press suggested her website would make a good book and they published ‘Wildflowers of Ireland – A Personal Record’ in 2011. ‘The Wildflowers of Ireland – A Field Guide’ followed in 2014. Through feedback from the website, Zoë realised that there was a growing number of people who wanted to know what species they were finding but couldn’t manage a more advanced flora so she took a chance, designing a book which would categorise 530+ species by colour groups rather than by families. The response proved that it was worth the risk and the book has been re-printed three times already. Through her Facebook page Wildflowers of Ireland, Zoë has built up a huge following of like-minded individuals and her page has proved to be an invaluable resource for those with an interest in wildflower identification. Here Zoë also tirelessly promotes the work of the Data Centre and the importance of biological recording.

She is still learning and recently undertook an online Field Studies Council course on plant recognition. The tutor assigned to her turned out to be Paul Green, subject of this award in 2009 and someone who has taught her so much about botany.

Zoë has supported the work of the Data Centre since the Centre’s early days, not only through submitting her significant and high quality data but also by promoting the Centre’s recording initiatives and sharing her wealth of knowledge and love of wildflowers through to the Centre’s workshop programmes.

The National Biodiversity Data Centre is delighted to recognise Zoë’s outstanding contribution to biological recording in Ireland by awarding her the Distinguished Recorder Award 2016. The award ceremony will take place in the Ceramics Room, National Museum of Ireland, Kildare Street, Dublin 2 on Friday 25th November 2016 @11:00hrs.