“All good things come in poos!”

If the above line was designed to grab people’s attention, it sure caught mine. The statement originates from a tweet posted last week on the 25th March by Laois dairy farmer Bruce Thompson.

Thompson was aiming to spread the word about his new research project on Ireland’s dung beetles and is hoping to get as many livestock farmers on board as soon as possible. He wants any farmers who are open to the idea of collecting dung beetles throughout the grazing season and in sending them off in the post to get in touch with him. If you wish to drop Bruce an email to let him know that you would like to volunteer, click here.

A core area of focus for this Laois dairy farmer is the relationship between the use of anthelmintics (anti-parasitic drugs or ‘wormers’) in livestock agriculture and the prevalence and diversity of local dung beetles. Past studies in Ireland have indicated that Ivermectin anthelmintic medicines reduce the growth rates of some larval dung beetle species. Further research in this area has also been carried out in other countries such as the UK, Australia and South Africa. For farmers, the management of gastrointestinal parasite infections is one of the most common and economically important challenges in livestock production. But according to the findings of previous research, it would appear that dung-burying beetles significantly reduce intestinal-parasite survival, as noted in this Oxford Academic Bioscience article.

It is worrying therefore, that the very anthelmintics that are used commonly in agriculture to treat parasite infections do not degrade in livestock during digestion, but pass through the animal through their faeces into the environment. It is here that unsuspecting dung beetles and other soil microbiota appear to be affected by the drug’s toxic properties which may have knock-on consequences for beetle populations and natural ecosystem functions and services such as nutrient cycling, soil aeration, reduced pasture fouling from manure, improved foliage palatability, and parasite control. “If dung-beetle populations are allowed to thrive and recover, they can help naturally control the very parasites farmers are treating”, as noted by entomologist and decomposer insect specialist Dr. Bryony Sands of Bristol University who was quoted in Bioscience article mentioned above.

This is how dung beetles emerge on a well stocked farm that uses very few wormers. Any parasites laid in this pat wouldn’t stand a chance. This is Ireland yesterday. pic.twitter.com/pBvD1NhSLc

Thompson, who was awarded a scholarship by Nuffield Ireland to complete this research intends to “disseminate the information (with the publication of a report on his findings) to both farmers and ecologists to create a better understanding of both the beetles and their habitats and to quantify their benefits.”

Dr. Aidan O’Hanlon, Entomological Curator at the National Museum of Ireland, who will be assisting Thompson on his project, alludes to a series of other benefits that will come of this project, which include among others a snapshot into the decomposer community of beetles and what it looks like today on Irish farms after “30 years of agricultural intensification and increased anti-parasitic drug usage.”

It’s an opportunity to build a map of Ireland’s dung beetle community, a group of insects whose important ecological role is largely under-appreciated (despite providing ecosystem services worth £367 million in the UK according to this study) and a group of insects for which there is a significant dearth of information in Ireland both in terms of conservation status and distributional knowledge and patterns. Hopefully it’s a start of good things to come for Ireland’s dung beetles!

Ben Malone – Admin & Engagement Officer at the National Biodiversity Data Centre, with thanks to Bruce Thompson and Dr. Aidan O’Hanlon for their contributions. 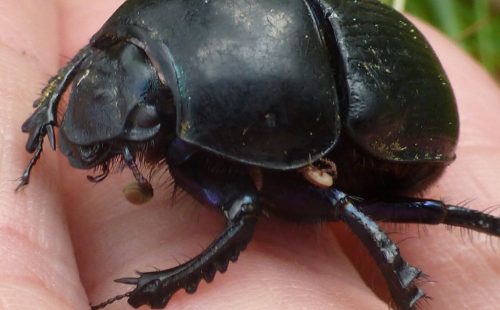