The Intergovernmental Panel on Biodiversity and Ecosystem Service (IPBES) has published its global assessment on the state of the world’s biodiversity and ecosystem services. In a personal comment piece Dr. Liam Lysaght, Director of the National Biodiversity Data Centre, reflects on how this relates specifically to Ireland.

The findings of the most recent global assessment won’t come as any surprise to those of us working in the field of nature conservation, but could the headlines be any more stark?

The report shows that nature is declining globally at rates unprecedented in human history — and the rate of species extinctions is accelerating, with grave impacts on people around the world now likely. The health of ecosystems on which we and all other species depend is deteriorating more rapidly than ever. We are eroding the very foundations of our and future generation’s economies, livelihoods, food security, health and quality of life worldwide.

And the link to sustainable development is clear. Current negative trends in biodiversity and ecosystems are undermining progress towards 80% of the assessed targets of the Sustainable Development Goals, related to poverty, hunger, health, water, cities, climate, oceans and land. Loss of biodiversity is shown to be not only an environmental issue, but also a developmental, economic, security, social and moral issue as well.

The Report also stresses that it is not too late to make a difference, but only if we start now at every level from local to global. The report concludes that “Through transformative change, nature can still be conserved, restored and used sustainably – this is also key to meeting most other global goals. By transformative change, the report means a fundamental, system-wide reorganization across technological, economic and social factors, including paradigms, goals and values.”

The assessment was compiled by 145 expert authors from 50 countries over the past three years, with inputs from another 310 contributing authors. It is based on the systematic review of about 15,000 scientific and government sources so it has credibility. The findings need to be listened to and, more importantly, acted upon, and acted upon quickly.

What relevance does this have for Ireland?

The key point is that Ireland is not immune from the trends reported on in the Global Assessment; Ireland is facing exactly the same biodiversity crisis. To echo the words of Robert Watson, Chair of IPBES “We have lost time. We must act now”

Around 31,000 species are known to occur in Ireland, yet the conservation status of only about 10% has been assessed. This means we have a fundamental knowledge gap in how biodiversity is changing in Ireland. But what we do know is:

Despite the overall negative trends, there are some positive developments that should give us hope. Here are just a few, but there are many, many more local-level initiatives that go a largely unnoticed.

No matter where one stands on the spectrum of how well or how poorly you think Ireland is doing on the conservation of biological diversity, the key message of the IPBES report is that enough is not being done, and that we now have the added problem of time not being on our side.

Ireland is in the middle of a biodiversity crisis, which is not an esoteric concern rather an existential crisis.  We have a crisis, and Government must face up to this. Wicklow County Council should be commended for recently declaring a biodiversity and climate-change emergency; the onus is now on all the other organs of local, regional and national administration to follow suit.

The biodiversity crisis needs to be taken seriously and the conditions must be created where we can have an honest, evidence-based discussion around how to address this crisis. As someone who sometimes speaks out on the worst excesses of biodiversity damage I see in my travels, it always surprises me how often I am confronted simply for speaking out; it is a classic case of shooting the messenger rather than address the message. This is particularly the case in relation to agriculture and forestry. Any public comment which seeks to address the role that agricultural or forestry production systems and practices play in biodiversity declines is met with huge hostility; even to raise it is almost treated as being in some way unpatriotic. This attitude must end and Government has to take the lead in changing that attitude. Because the irrefutable fact is biodiversity loss cannot be adequately addressed without finding ways for agriculture and farmland to make space for biodiversity. I still believe the best way to do this is for all farms in receipt of CAP payments and other subsidies to be obliged to have a minimum of 20 per cent of their land area actively promoting biodiversity enhancement measures. And farmers themselves should have the discretion as how best to deliver this on their land, supported by empirical evidence that the measures are indeed delivering biodiversity benefits.

The first National Biodiversity Conference has demonstrated that Ireland has the pool of talent, expertise and energy to spearhead real change for Irish society; change that can come up with innovative, inclusive solutions for addressing Ireland’s biodiversity crisis. But the Government and its senior civil-servants need to grasp the nettle on the back of this IPBES Assessment and create the conditions to allow this to happen. If the Government does this, scientists and nature conservationists should not be found wanting in engaging in such a process, positively and constructively. 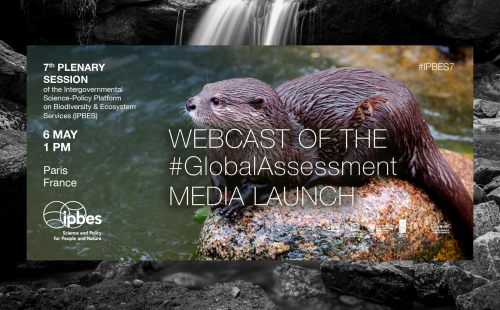