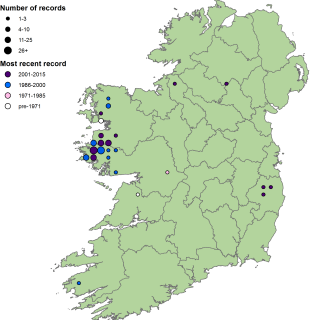 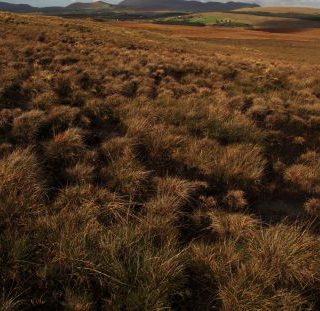 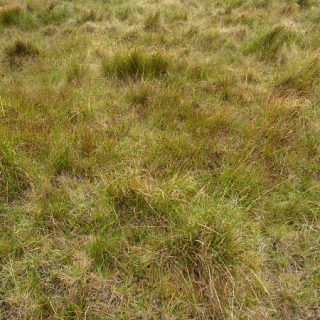 Plant cover in this community tends to be quite low and is primarily provided by Molinia caerulea and Schoenus nigricans together with Narthecium ossifragum, Rhynchospora alba and Eriophorum angustifolium. Calluna vulgaris and Erica tetralix form a sparse dwarf shrub layer. Also frequent are Drosera rotundifolia, tufts of Eriophorum vaginatum and shoots of Potentilla erecta. The bryophyte layer is weakly developed with patches of Racomitrium lanuginosum the most frequent component. Occasionally, there is some Campylopus atrovirens, Pleurozia purpurea, Hypnum jutlandicum and Sphagnum papillosum; the general scant cover of Sphagnum species is noteworthy.

This is mainly a community of degraded peatlands in the lowlands which have been subjected to drainage, peat extraction, overgrazing or trampling. Soils are wet, ombrogenous, deep, acidic peats of low fertility (mean extent of bare peat = 66.2%, n = 136).

This assemblage represents bogs which are not as badly degraded as the BG1D Eriophorum angustifolium – Campylopus introflexus bog, so Eriophorum angustifolium does not dominate. Overall species cover and bryophyte cover in particular is lower, however, than in the intact Schoenus communities, HE4C Molinia caerulea – Schoenus nigricans – Calluna vulgaris peatland and BG2D Erica tetralix – Schoenus nigricans bog.

This is on average a rather species-poor bog community (species/4 m2 = 13.8, n = 24). Most examples are from blanket bog that can be deemed inactive (non-peat forming) due to the paucity of Sphagnum cover. Dependent on hydrological modelling of restoration potential, they may qualify as the non-priority version of EU HD Annex I habitat 7130 Blanket bog (active)*. In the rare instances where there is reasonable cover of Sphagnum, the priority version of this habitat could be considered.

In the lowlands, this vegetation is typically a result of turf-cutting, either by machine or by hand, and also by overgrazing and trampling from livestock (sheep or cattle). Other threats include afforestation and burning