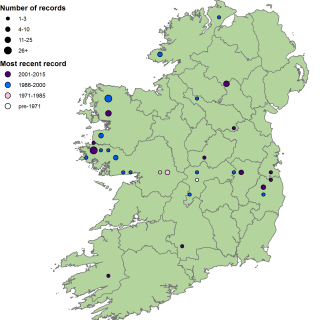 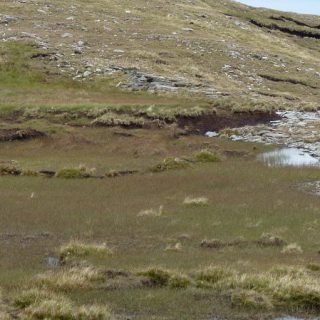 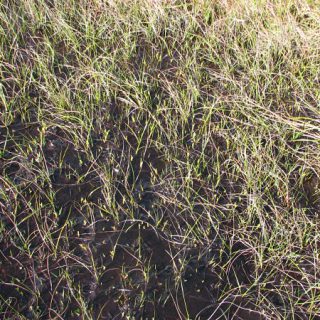 Eriophorum angustifolium is the only constant species in this community, sometimes growing in mono-specific swards. There is frequently some patchy cover of Calluna vulgaris and occasionally some scrappy growth of Molinia caerulea, Narthecium ossifragum and Trichophorum cespitosum/germanicum. Overall cover of plants is typically low, with areas of bare or algal-covered peat common. On wetter peats Juncus bulbosus may occur, while on drier sections, the non-native moss Campylopus introflexus may colonise. Infrequently, Polytrichum commune may be abundant.

This is mainly a community of degraded peatlands which have been subjected to drainage, peat extraction, erosion, overgrazing, trampling or burning. It can occur in the uplands or lowlands. In upland blanket bog, this vegetation is characteristic of eroding blanket bog where it colonizes and, at least temporarily, stabilizes slumped areas of soft peat amongst the peat haggs. In lowland bog, it occurs extensively in areas of industrial peat extraction both on the damaged peat surface and in drains. Soils are wet, ombrogenous, acidic peats which can be shallow or deep (mean extent of bare peat = 57.8%, n = 32).

This is a distinctive community that is unlikely to generate too much confusion. The BG1C Schoenus nigricans – Eriophorum angustifolium bog community can also represent degraded peat vegetation, but both cover and diversity of species are much greater there as the disturbance is less pronounced.

This is a species-poor degraded peatland community (species/4 m2 = 10.5, n = 26). Most examples come from areas of blanket bog and qualify as the non-priority form of EU HD Annex I habitat 7130 Blanket bog (active)*. Potentially, some stands of this vegetation type could correspond to habitat 7120 Degraded raised bogs, but this would be dependent on hydrological modelling of restoration potential.

In the lowlands, this vegetation is typically a result of turf-cutting, either by machine or by hand. In the uplands, bogs where this vegetation occurs are usually used for extensive sheep grazing; the erosion associated with this community may be linked to overgrazing. This type of degradation can also be encountered along trampled hiking routes. Other threats include afforestation and burning.