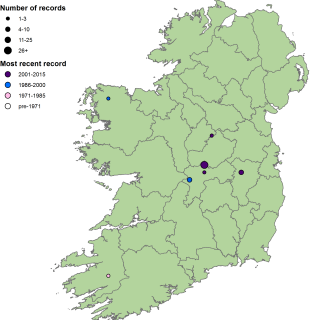 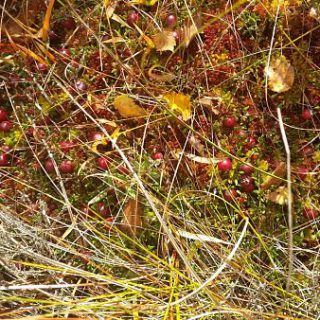 This bog vegetation is characterized by a mixture of several constant species. Eriophorum vaginatum tussocks occur alongside bushes of Calluna vulgaris and Erica tetralix and tufts of Eriophorum angustifolium. Beneath these is a bryophyte layer dominated by Aulacomnium palustre, Sphagnum capillifolium and Sphagnum recurvum agg. and upon this is invariably found a trailing tangle of Vaccinium oxycoccos. Frequently accompanying these species are Molinia caerulea, Drosera rotundifolia, Hypnum jutlandicum, Sphagnum magellanicum (= Sphagnum divinum/medium), Sphagnum palustre and Andromeda polifolia. Within the bryophyte layer, strands of Odontoschisma sphagni and Calypogeia sphagnicola may be found. Sphagnum papillosum and Sphagnum cuspidatum are occasional, as is Menyanthes trifoliata in wetter areas.

This is a community of relatively intact raised bogs, occurring on deep, acidic, oligotrophic, ombrogenous peats but with some degree of groundwater flushing. It can form the transition between open bog and bog woodland. Mean altitude = 50 m, n = 11.

From the other main raised bog community, BG2B Erica tetralix – Andromeda polifolia bog, this community differs in displaying higher frequencies and abundances of both Vaccinium oxycoccos and Aulacomnium palustre. Andromeda polifolia is rarely encountered outside of these two communities.

All examples of this community qualify as EU HD Annex I habitat 7120 Raised bog (active)*. This is on average a moderately species-rich community (species/4 m2 = 16.4, n = 18) that supports several specialists.

The main threat to the raised bogs supporting this vegetation is turf-cutting, either by hand or machine, and associated drainage. Some sites have also suffered from afforestation. Locally, action has been taken to address these impacts and some sites are managed strictly for conservation.