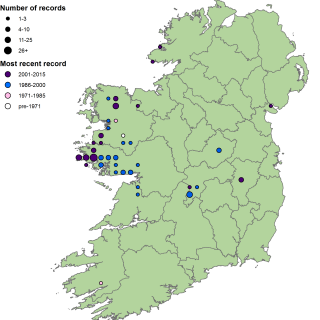 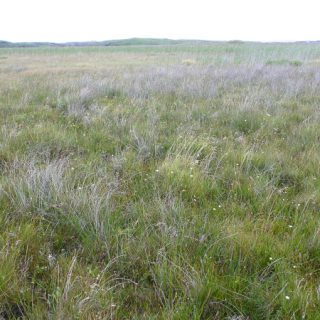 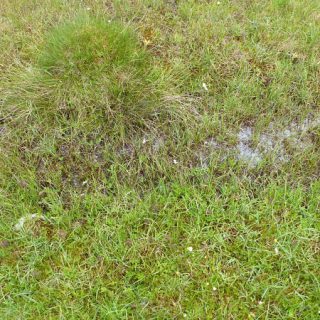 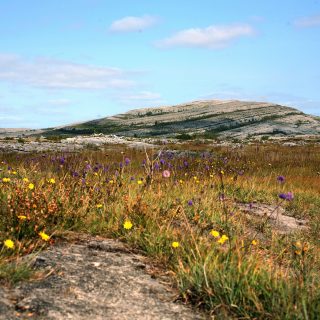 Schoenus nigricans and Molinia caerulea are constant species in this diverse fen community and lend it a tussocky physiognomy. Also constant here are Menyanthes trifoliata and Eriophorum angustifolium with its distinctive wine-tipped leaves. Frequently one will also find some Carex viridula, Potamogeton polygonifolius, Carex panicea, Anagallis tenella, Drosera rotundifolia, Juncus bulbosus or the pale shoots of Selaginella selaginoides. Myrica gale may occur where there is some flushing and Erica tetralix provides some rather sparse dwarf shrub cover. There is usually a well-developed bryophyte layer composed mainly of the so-called ‘brown mosses’. Campylium stellatum is very frequent and with it are often seen the red-brown swollen shoots of Scorpidium scorpioides or the greasy thalli of Aneura pinguis, while Drepanocladus cossonii/revolvens is occasional.

This community occurs in wet fens and flushes on mildly basic, impoverished peats, often in association with blanket bog.

The most closely related community is the FE1B Schoenus nigricans – Succisa pratensis fen. Both communities contain Schoenus, Molinia and a suite of ‘brown mosses’. FE1B, however contains many species often found in grassland including Cirsium dissectum, Mentha aquatica, Carex flacca, Euphrasia officinalis agg., Linum catharticum, Lotus corniculatus and Prunella vulgaris, which are absent from the more bog-like FE1A. Succisa pratensis occurs in both communities but is far more frequent in FE1B. The HE4C Molinia caerulea – Schoenus nigricans – Calluna vulgaris peatland and the BG2D Erica tetralix – Schoenus nigricans bog both share with the present community the feature of tussocky Schoenus and Molinia vegetation, but the FE1A community clearly differs from them in the absence of Calluna vulgaris, the infrequence of Sphagnum spp., and the presence of ‘brown mosses’.

Almost all examples of this community should correspond with the EU HD Annex I habitat 7230 Alkaline fens. Rare examples with Cladium mariscus may correspond with priority habitat 7210 Cladium fens*. It is of medium species richness (species/4 m2 = 19.8, n = 130).

These stands are typically unmanaged but may be grazed by livestock. The main threats are from peat extraction, infilling, drainage, reclamation and eutrophication.