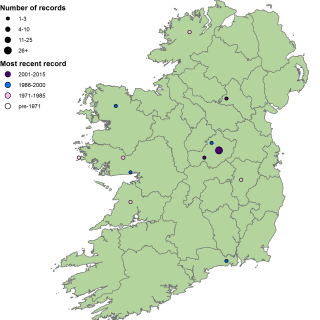 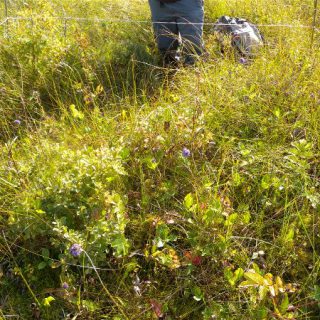 This a very diverse mire community usually dominated by the slender leaves of Carex lasiocarpa and the broad green leaves of Menyanthes trifoliata. Other constant features are Equisetum fluviatile, the forbs Succisa pratensis, Potentilla palustris, Filipendula ulmaria and Angelica sylvestris, and the trailing stems of Vaccinium oxycoccos. Carex limosa and the rather rare, tussock-forming Carex appropinquata are frequent here, as is some patchy cover of Salix repens. There is usually a well-developed bryophyte layer in which Calliergonella cuspidata and Calliergon giganteum are the most frequent plants, but the calcicole ‘brown mosses’ Campylium stellatum, Drepanocladus cossonii/revolvens, Bryum pseudotriquetrum or Scorpidium scorpioides are often encountered.

This is a wetland community of nutrient-poor, relatively neutral situations. Most records come from the quaking fen scraw of Scragh Bog.

This is a species-rich community (species/4 m2 = 24.0, n = 85). Examples may correspond with EU HD Annex I habitat 7140 Transition mires. Hamatocaulis vernicosus, an EU HD Annex II moss species is known from this community.