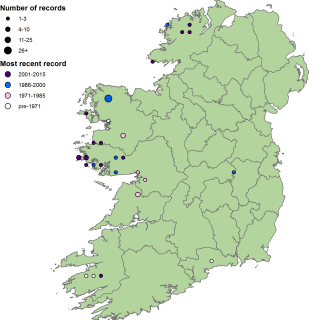 Juncus bulbosus vegetation is typically associated with nutrient-poor and acidic, aquatic or sub-aquatic conditions. It may be found on the shores of oligotrophic lakes, the margins of peaty dystrophic pools and in shallow rivers. It also occurs in drainage ditches and erosion channels in degraded bog.

Sub-community FW1Ci occurs in similar situations to the FW1A Littorella uniflora – Ranunculus flammula community but Littorella uniflora is seldom present in the sub-community and never abundant. Sub-community FW1Cii differs from the degraded bog represented by BG1D Eriophorum angustifolium – Campylopus introflexus bog by the greater frequency of Juncus bulbosus and the absence of bog species such as Eriophorum angustifolium, Calluna vulgaris or Molinia caerulea.

This vegetation is typically unmanaged. Lakeshore and pool margin stands may be impacted upon by drainage and eutrophication. Stands of FW1Cii are typically a result of turf-cutting, either by machine or by hand, or erosion, which may be linked to extensive sheep grazing.