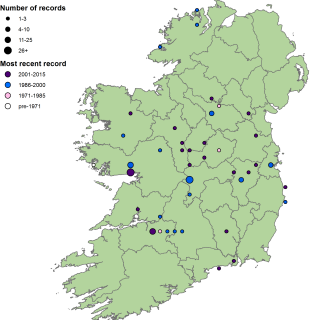 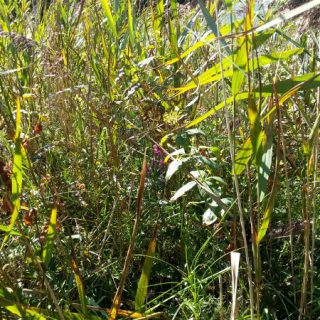 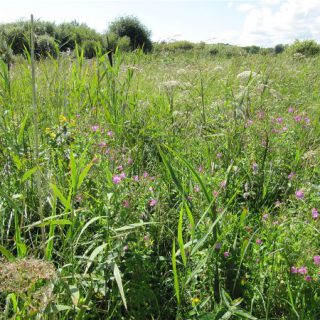 This is a rather variable assemblage of swampy ground which can be dominated by number of different species but plentiful Filipendula ulmaria is a constant feature. It is frequently joined by the tall forb species Valeriana officinalis and less often by Iris pseudacorus, Lythrum salicaria, Lysimachia vulgaris or Angelica sylvestris. In addition several graminoids may be present. Phragmites australis, Carex disticha and Agrostis stolonifera are frequent and the following species are all occasional: Festuca arundinacea, Phalaris arundinacea, Molinia caerulea, Festuca rubra, Juncus effusus and Holcus lanatus. Equisetum fluviatile occurs on the damper ground. Through the diverse flora may be found clambering stems of Vicia cracca, Galium palustre or Lathyrus pratensis. There may be a sparse bryophyte layer with Calliergonella cuspidata the most frequent species.

This community is likely to be found on periodically inundated, fairly fertile and base-rich ground close to lakes and rivers.

The abundance of Filipendula ulmaria and other tall forb species set this community apart from the others in group FW3. The marsh-grassland communities, GL1B and GL2A, also exhibit an abundance of Filipendula, but they are of distinctly different structure, lacking the taller species commonly found here such as Phragmites australis.

This is a species-rich community compared to other swamp types (species/4 m2 = 13.1, n = 117), being transitional to wet grassland. Examples of this vegetation are likely to correspond with EU HD Annex I habitat 6430 Hydrophilous tall herb.

Most of these stands are probably unmanaged but some drier types may be used for rough grazing. They are threatened by eutrophication of nearby waters, drainage and agricultural improvement.