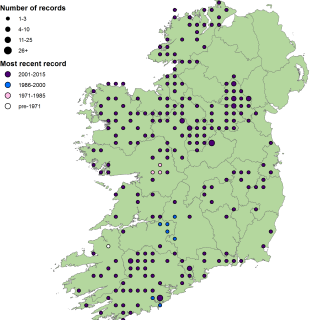 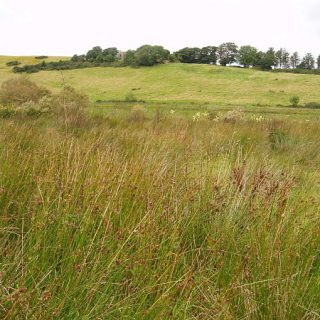 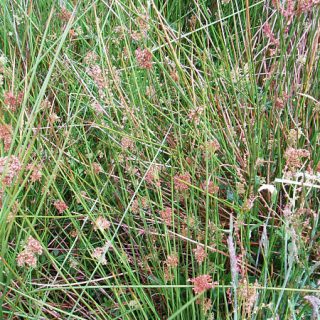 This community is dominated by tall, thigh-high tussocks of Juncus effusus, between which can be found a lower sward of Agrostis stolonifera and Holcus lanatus that is often poached by grazing livestock (mean graminoid height = 78.8 cm, n = 271). No other species are constant here. Rumex acetosa is frequently present, but forb cover is very low within this assemblage. Anthoxanthum odoratum is frequent, while Juncus acutiflorus occurs occasionally and can be abundant, but is subordinate to Juncus effusus. Occasional forbs characteristic of the poorly draining soil conditions include Ranunculus repens, Cardamine pratensis, Filipendula ulmaria, Galium palustre and Lotus pedunculatus (mean forb height = 36.0 cm, n = 271). The bryophyte layer is a rather standard, scanty mixture of Kindbergia praelonga, Calliergonella cuspidata, Rhytidiadelphus squarrosus and Brachythecium rutabulum.

The Juncus effusus – Rumex acetosa grassland is a very common sward type across Ireland on low-production farmland. It is a very species-poor community of wet, gleyed or sometimes peaty soils, usually on flat ground or gentle slopes in the lowlands (mean slope = 1.5°, n = 271; mean altitude = 98 m, n = 271). Soils are mildly acidic, of average fertility and quite organic in the upper horizons (mean organic content = 30.2%, n = 192).

Two sub-communities are described. The typical community (GL2Di) is as defined above. In the Polytrichum commune – Sphagnum spp. sub-community (GL2Dii) of upland flushes, Juncus spp. still dominate but between the tussocks can be found a soft carpet of Sphagnum mosses (usually Sphagnum recurvum agg. and Sphagnum palustre) and cushions of P. commune. It is a widespread assemblage but under-recorded.

These swards are managed as rough grazing land (typically for cattle). Occasional topping of the rushes may occur. The main threats to these grasslands include improvement, abandonment and afforestation.