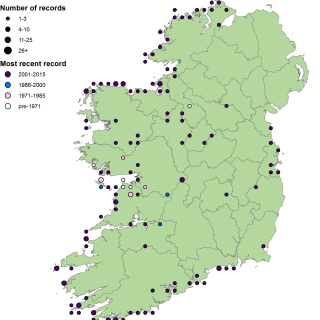 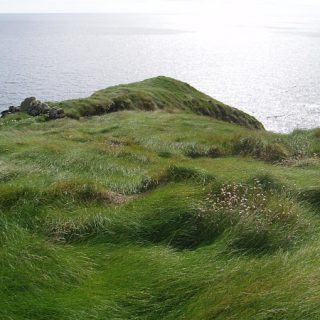 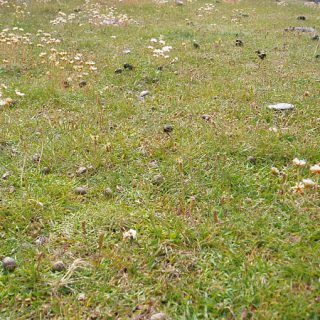 Included in this community are swards grouped due to the common dominance of Festuca rubra. The only other constant species are Plantago lanceolata, Lotus corniculatus and Trifolium repens. Holcus lanatus and Agrostis stolonifera are the most frequent of the other grasses. Species indicative of calcareous grassland may occur (e.g. Carex flacca, Euphrasia officinalis agg. and Koeleria macrantha) but are typically not plentiful. Further variation is discussed under ‘Sub-communities’ below.

Festuca rubra seldom achieves in other communities of the grassland (GL) division the abundance that is displayed in community GL3F and the aforementioned maritime plants are rarely found with abundance in other GL grasslands. Festuca rubra is, however, a key species in both the SM4 group of upper saltmarshes and the dune grasslands of the DU2 group. Plantago coronopus is a key indicator of the RH4B Plantago coronopus – Armeria maritima coastal rock community which can occur in association with GL3F.

This is a fairly species-poor grassland community (species/4 m2 = 17.9, n = 126) but the maritime assemblage does support a number of coastal specialists. A few swards on soils containing heavy metals and generally found in association with old mine workings in coastal areas, correspond with the EU HD Annex I habitat 6130 Calaminarian grassland.

Sub-community GL3Fi may be grazed by sheep or cattle, or ungrazed. The rank sward of sub-community GL3Fii is usually ungrazed, occurring in inaccessible areas along the coast and abandoned fields inland. Coastal erosion is a threat to maritime communities. Inland communities could gradually be lost if abandonment becomes long-term or if intensive management is introduced.