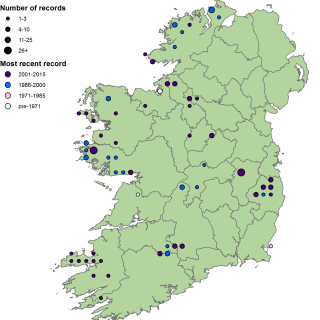 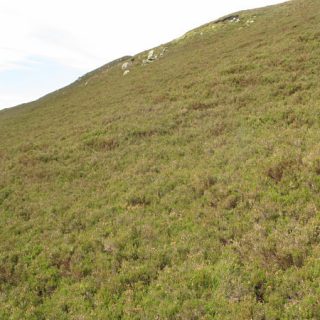 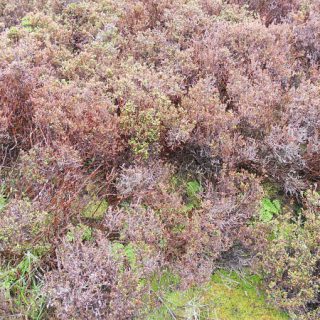 This community represents dense, mature expanses of Calluna vulgaris which dominates strongly, resulting in there being few other constant species. Erica cinerea is usually present, as is Potentilla erecta, a near ubiquitous species in Irish heaths. Beneath the dwarf shrub canopy, a bryophyte layer composed mostly of pleurocarpous mosses can be found; Hypnum jutlandicum is chief amongst these, but Rhytidiadelphus loreus and Hylocomium splendens are also common. Tufts of Molinia caerulea and some shoots of Vaccinium myrtillus are frequently encountered but are seldom plentiful. Occasional species include Deschampsia flexuosa and Eriophorum angustifolium.

This is mainly a community of the middle altitudes of hills and mountains (mean altitude = 346 m, n = 119; mean slope = 19.7°, n = 70), primarily heathland where grazing pressure is relatively light. Soils in these instances are relatively well-drained, acidic and infertile. It may also be encountered on deep, bogland peats where there has been extensive turf-cutting and/drainage. Mean extent of bare rock = 1.5%, n = 71.

Calluna vulgaris is at its most abundant in this community. Ulex gallii is far less abundant here than in HE2A and wet heath indicators such as Molinia caerulea and Trichophorum cespitosum/germanicum are not as abundant as they are in the remaining communities of group HE2.

Most examples of this vegetation qualify as EU HD Annex I habitat 4030 Dry heaths. This is on average a rather species-poor community in terms of plants (species/4 m2 = 14.1, n = 148).

These heaths, which often form parts of commonages, may be used as rough grazing land (typically for sheep). Burning may be periodically used across large areas to suppress the dwarf shrubs and encourage grass growth. Overgrazing can also be a problem. Another threat is agricultural improvement.