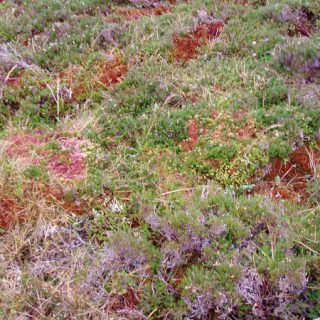 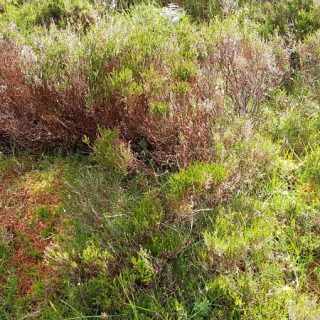 Calluna vulgaris is the main component of this community, but Vaccinium myrtillus and Erica cinerea are also constants and occasionally Empetrum nigrum occurs. Potentilla erecta is likely to found together with some tufts of Deschampsia flexuosa. Both Agrostis canina/vinealis and Agrostis capillaris are frequent. The bryophyte layer is extensive and quite diverse. The usual heathland pleurocarps are present, Rhytidiadelphus loreus, Hylocomium splendens, Hypnum jutlandicum and Pleurozium schreberi, but they are joined by Racomitrium lanuginosum and striking patches of Sphagnum capillifolium. There is also a good range of liverwort species. Scapania gracilis and Diplophyllum albicans are constants here, probably growing in association with the rocks and stones which often litter the heath, but one will frequently find patches of the vermicular Pleurozia purpurea and also occasionally spot Lophozia ventricosa, Bazzania tricrenata, Mylia taylorii and rusty orange cushions of Herbertus aduncus .

Racomitrium lanuginosum is more abundant here than in community HE3A but it does not carpet like it does in HE3D and HE3E, whilst in HE3C grasses and sedges are more prominent.

Almost all of the examples of this vegetation qualify as either EU HD Annex I habitat 4030 Dry heath or habitat 4060 Alpine and subalpine heath, depending upon altitude and exposure. It is a very species-rich heath community (species/4 m2 = 25.2, n = 127), supporting several specialist species and a range of liverworts (bryophyte species/4 m2 = 15.6, n = 127).