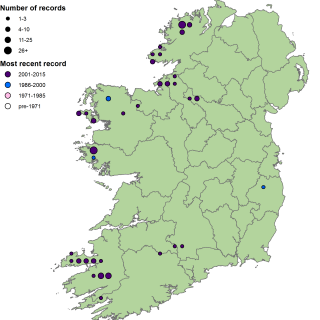 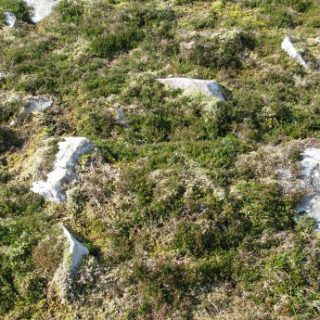 Calluna vulgaris and Racomitrium lanuginosum dominate in this low-growing, wind-clipped heath, together forming a carpet of springy vegetation. Erica cinerea and Vaccinium myrtillus are also constants and Empetrum nigrum frequently adds to the dwarf shrub component. Potentilla erecta and some thin tufts of Deschampsia flexuosa are likely to be found. The bryophyte layer is scarcely lower than the other plants and here Hypnum jutlandicum and Rhytidiadelphus loreus join the hoary mounds of Racomitrium. Lichens are a regular feature of this community, with the forking shoots of Cladonia uncialis a constant presence and Cladonia portentosa frequent. These heaths are dotted with occasional, clustered shoots of Huperzia selago.

The abundance of Racomitrium lanuginosum makes this a striking community. It could be confused with HE3E Racomitrium lanuginosum – Festuca vivipara heath, but in that assemblage Calluna vulgaris is less abundant and there is a greater grass component. In community HE3B Calluna vulgaris – Scapania gracilis heath, pleurocarpous mosses and Sphagnum capillifolium tend to be more prominent. The present community lacks the Nardus stricta patches of community HE3C.

Almost all of the examples of this vegetation qualify as EU HD Annex I habitat 4060 Alpine and subalpine heath. This is on average a heath community of middling diversity (species/4 m2 = 18.7, n = 209).