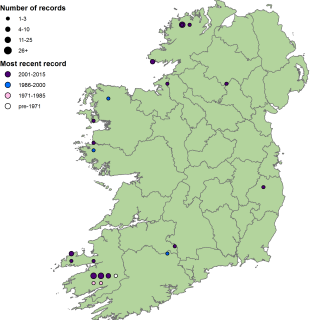 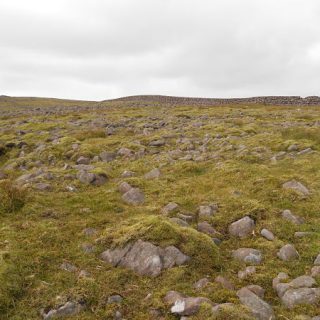 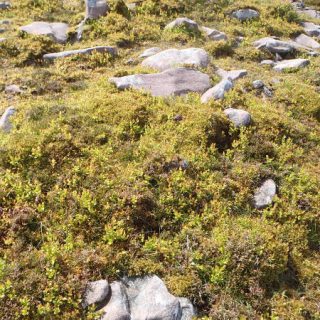 This is a low-growing, rather sparsely vegetated community with Racomitrium lanuginosum often the only plentiful species. Growing alongside the mounds of this moss are usually found stems of Vaccinium myrtillus and a few tufts of Agrostis capillaris and Festuca vivipara together with some prostrate shoots of Galium saxatile. There is frequently some small cover of Calluna vulgaris and Deschampsia flexuosa. The other typical members of the bryophyte layer are Hypnum jutlandicum, Diplophyllum albicans, Rhytidiadelphus loreus, Scapania gracilis and Hylocomium splendens, but acrocarpous mosses such as Polytrichum alpinum, Dicranum scoparium and Dicranella heteromalla are also frequent. Occasionally one will find here patches of Herbertus aduncus or Carex bigelowii.

A similar community is the HE3D Calluna vulgaris – Racomitrium lanuginosum heath which also occurs on exposed ground in the mountains. That community, however, tends to occur at slightly lower altitudes, with Calluna vulgaris much more abundant. The RH4F Festuca vivipara – Oligotrichum hercynicum fellfield differs in the lower cover of Racomitrium species and the typical absence of dwarf shrubs and pleurocarpous mosses.

Most examples of this vegetation qualify as EU HD Annex I habitat 4060 Alpine and subalpine heath. Others, particularly those which support arctic-alpine species, may correspond with habitat 6150 Siliceous alpine and boreal grasslands. This is on average a species-rich heath community (species/4 m2 = 22.5, n = 103).