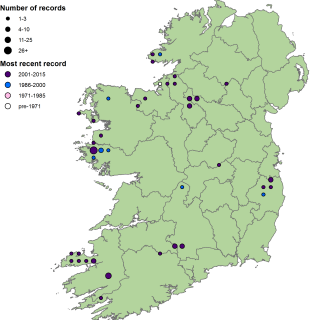 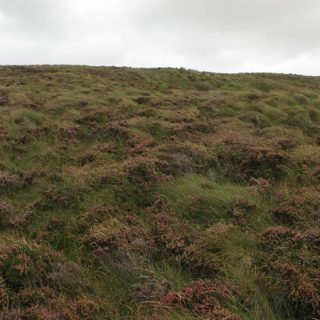 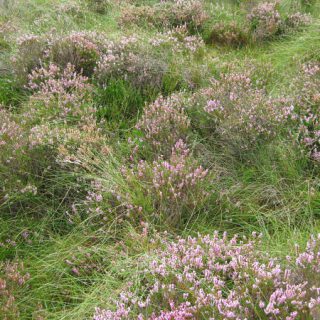 In this community Calluna vulgaris dominates, forming a fairly dense shrub layer interspersed by tussocks of Eriophorum vaginatum, spreading tufts of Eriophorum angustifolium and patches of Vaccinium myrtillus. Juncus squarrosus is frequent, often indicating some disturbance, and in some variants Empetrum nigrum occurs. In the bryophyte layer, the heathland quartet of Rhytidiadelphus loreus, Hypnum jutlandicum, Hylocomium splendens and Pleurozium schreberi will usually be found, together with hummocks of Sphagnum capillifolium, but other sphagna are occasional or scarce. Racomitrium lanuginosum is occasional and not abundant. The pale green threads of Plagiothecium undulatum are commonly found beneath the heather.

This bog community is placed alongside the high-altitude heaths of the HE3 Vaccinium myrtillus – Racomitrium lanuginosum group due to the abundance of Calluna vulgaris, the high frequency of Vaccinium myrtillus and the pleurocarpous nature of the bryophyte layer. However, community HE3F differs significantly in the abundance of Eriophorum spp. Indeed, the most similar community is the BG2E Calluna vulgaris – Eriophorum spp. bog. That community is rather wetter in nature with a greater cover of Erica tetralix, Molinia caerulea and Trichophorum cespitosum/germanicum but less Vaccinium myrtillus. BG2E also supports a greater range of Sphagnum species whilst pleurocarpous mosses are less prominent. Juncus squarrosus is typically more abundant in HE3G than in HE3Fi.

These bogs, which often form parts of commonages, may be used as rough grazing land (typically for sheep) and overgrazing can be a problem. Erosion is commonplace within such bogs, producing gullies and haggs.