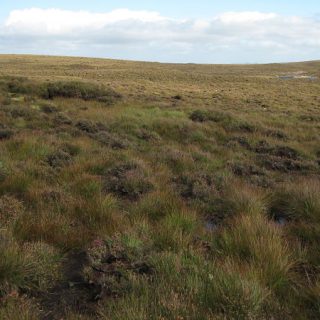 The main species in this community are Molinia caerulea, Calluna vulgaris and Trichophorum cespitosum/germanicum, but overall plant cover is not that high. Erica tetralix, Potentilla erecta and Narthecium ossifragum are the other constants in the field layer. Frequently one will also find here Carex panicea, Erica cinerea, Eriophorum angustifolium and Schoenus nigricans. The bryophyte layer is pretty sparse, consisting mostly of Racomitrium lanuginosum, Pleurozia purpurea and Hypnum jutlandicum. Sphagnum capillifolium, Sphagnum tenellum and Sphagnum papillosum are each only occasional as is the disturbance indicator Sphagnum compactum. Cladonia portentosa and Cladonia uncialis are both frequent.

Trichophorum cespitosum/germanicum is more frequent here than in the other communities within the HE4 Molinia caerulea – Polygala serpyllifolia group or the degraded bogs of BG1C Schoenus nigricans – Eriophorum angustifolium bog community, which usually supports Rhynchospora alba. Schoenus nigricans is less frequent and abundant in the present community than in any of the three main communities where it occurs: BG1C, BG2D and HE4C.

This vegetation is degraded to some degree, typically as a result of turf-cutting and the associated drainage, and also by overgrazing and trampling from livestock (sheep or cattle). Other threats include afforestation and burning.