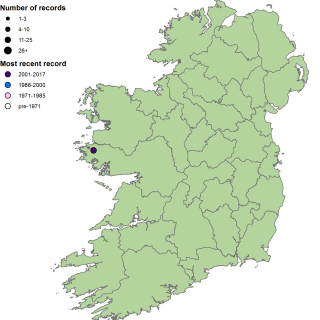 This community represents dense, species-poor thickets of the invasive non-native Rhododendron ponticum. Other vascular plants are infrequent. Occasionally, these thickets occur below an oak canopy and in these instances one may also find some sparse cover from Ilex aquifolium or some spindly growth of Sorbus aucuparia. In the field layer there may be some poor growth of Blechnum spicant and Molinia caerulea, or some persisting stems of Rubus fruitcosus agg. Numerous woodland bryophytes may be found here in the shade, but they are largely infrequent and sparsely growing. The main moss is Thuidium tamariscinum, which is constant. Others include Dicranum majus, Dicranum scoparium, Hypnum cupressiforme, Hookeria lucens, Mnium hornum and Rhytidiadelphus loreus.

This community has currently only been recorded from the Connemara National Park, but undoubtably is more widespread, invading acidic heaths, grasslands, bogs and woodlands and woodland margins.

This is a straightforward community that is unlikely to cause confusion. Rhododendron is a common invader of the acidic oakwoods represented by the WL1 Quercus petraea – Luzula sylvatica group. When Rhododendron is encountered beneath such a canopy, communities of that group should also be considered. As infestation progresses, stands are likely to become transitional between those communities and this one.

This is an invasive community, typically with very low conservation value, although the shaded and humid conditions can support rare bryophytes. Species/100 m2 = 16.6, n = 19.

Rhododendron ponticum is listed in the Third Schedule of the European Communities (Birds and Natural Habitats) Regulations, 2011, making it an offence under Regulation 49 of that instrument to plant, disperse, allow or cause to grow this plant. Rhododendron thickets can be removed by cutting, uprooting or injection of herbicide. Follow-up work is imperative to prevent reinfestation, for example spraying of regrowth, treatment of stumps and removal of seedlings.