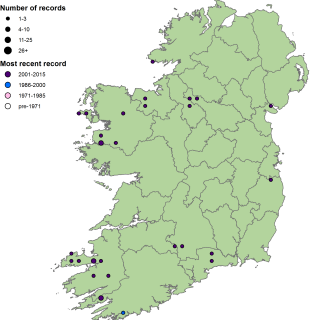 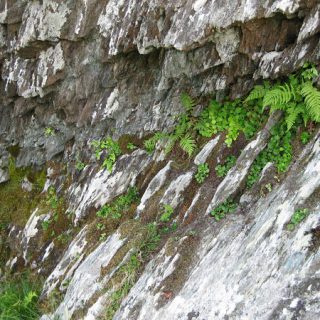 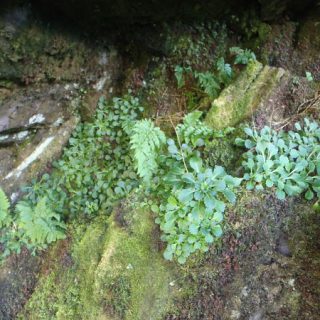 Saxifraga spathularis tends to be the most conspicuous species within this rocky habitat community, but it is also characterized by a suite of shade-loving bryophytes and the presence of ferns. Diplophyllum albicans and Isothecium myosuroides are the constant species alongside Saxifraga. Wefts of Hymenophyllum wilsonii are frequently found in the deeper shade, as are patches of Mnium hornum. Other frequent species are Hypnum jutlandicum, Frullania tamarisci, Racomitrium lanuginosum, Scapania gracilis, Dryopteris dilatata, Blechnum spicant and Thuidium tamariscinum. There can be small patches of dry heath vegetation with Calluna vulgaris and Vaccinium myrtillus occasionally found.

Two sub-communities are described for this community. The Saxifraga-spathularis – Festuca vivipara sub-community (RH2Ai) is predominantly found in the west of Ireland and supports the titular species. The Dryopteris dilatata – Polypodium vulgare sub-community (RH2Aii) typically lacks these species and is not restricted to the west.

Saxifraga spathularis, Hymenophyllum wilsonii and Dryopteris dilatata are more frequent in this community than elsewhere in the RH2 Racomitrium lanuginosum – Saxifraga spathularis group. The RH2D Angelica sylvestris – Breutelia chrysocoma ledge community also occurs on siliceous rock faces, but indicates areas of seepage where there is some basic enrichment. In the RH2B and RH2C scree communities, Racomitrium mosses are more prevalent.

Most examples of this community qualify as EU HD Annex I habitat 8220 Siliceous rocky slopes, but also included here are some plots from habitat 8110 Siliceous scree. Species/4 m2 = 20.1, n = 12.

Some more accessible areas of this vegetation may be sheep-grazed but it is essentially unmanaged. The impact of the non-native Epilobium brunnescens has not been investigated and hitherto no known management action has been taken. Climate change threatens arctic-alpine species which are restricted to upland sites such as these.