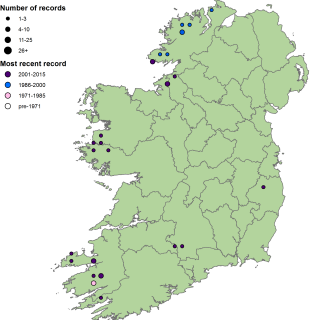 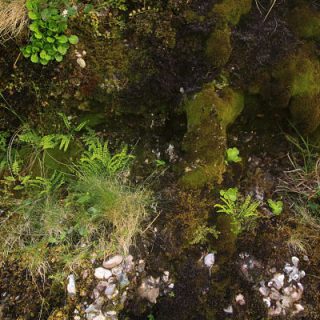 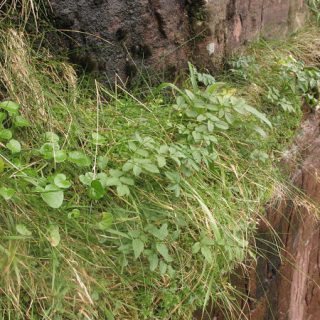 The field layer of this variable community usually contains Festuca vivipara and Viola riviniana/reichenbachiana. Frequently there are also some tufts of Carex viridula and Carex pulicaris plus Anthoxanthum odoratum, Thymus polytrichus, Euphrasia officinalis agg., Galium saxatile, Agrostis capillaris and the non-native forb Epilobium brunnescens. Angelica sylvestris is occasional. Calluna vulgaris may provide some dwarf shrub cover. Breutelia chrysocoma and Hylocomium splendens are the main bryophytes with Ctenidium molluscum also frequent. There are a large number of occasional species, including some species typically associated with lowland grassland such as Primula vulgaris, Hypericum pulchrum and Succisa pratensis. Festuca rubra, when present, can form dense mats. The deep cushions of Amphidium mougeotii and Anoectangium aestivum may also be found on the rock face here.

This community is rather intermediate between the calcareous RH1A Asplenium trichomanes – Ctenidium molluscum crevice community and the RH2A Saxifraga spathularis – Isothecium myosuroides crevice community, but is wetter than either. Ferns are less frequent here than those two assemblages and there are several more grassland species present.

Some more accessible areas of this vegetation may be sheep-grazed but it is essentially unmanaged. The impact of the non-native Epilobium brunnescens has not been investigated and hitherto no known management action has been taken. Climate change threatens arctic-alpine species which are restricted to such upland sites.