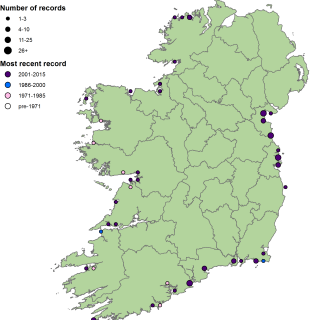 Annual Salicornia species may be the only vascular plants found in this community, which even later in the summer may remain distinctly open. Frequently, small clumps of Spartina agg. may occur, but these provide sparse cover. Puccinellia maritima and Suaeda maritima are only occasional and other vascular species are rare. Vegetation height is ankle-high by the end of the growing season (mean maximum vegetation height = 15.8 cm, n = 19). There is often an extensive algal mat and macroalgae are also occasionally found persisting here; Fucus spiralis is probably the main species but small specimens of Ascophyllum nodosum and Ulva lactuca may also occur.

This is an annual community, mainly of the lower fringe of saltmarsh where it is regularly inundated. It may also occur elsewhere in the marsh, on creek sides, depressions and disturbed ground. It can develop on a range of substrates but they are usually fairly firm underfoot. Conditions are base-rich (mean pH = 8.1, n = 19).

This is a very distinct community with which the main confusion probably concerns community SM2C in which Salicornia agg. is also a constant and sometimes abundant. That community, however, is found slightly higher in the marsh, allowing Puccinellia maritima to provide much greater cover and Limonium humile, Spergularia media and Aster tripolium to establish. SM1A also may transition into patches of SM1C Suaeda maritima saltmarsh, as Salicornia and Suaeda trade dominance.

Almost all examples of this pioneer vegetation qualify as EU HD Annex I habitat 1310 Salicornia mud. It is typically a very species-poor saltmarsh community (species/4 m2 = 2.7, n = 133), but the species that do occur are specialists. Puccinellia fasciculata is a nationally rare species listed on the Flora Protection Order, 2015.

These swards are typically unmanaged. The main immediate threat to this saltmarsh community is perceived to be invasion by Spartina agg. Sea-level rises as a result of climate change will have an impact, particularly in areas susceptible to coastal squeeze. Impacts from casual harvesting of Salicornia are not likely to be significant.