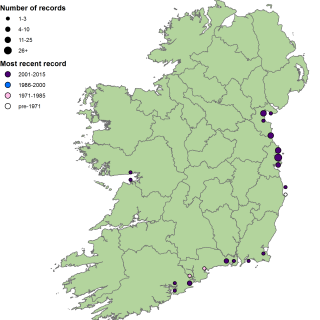 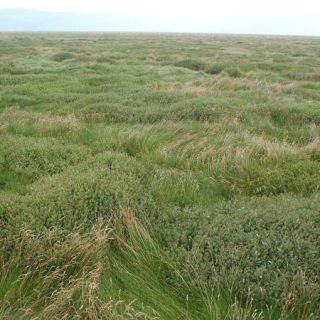 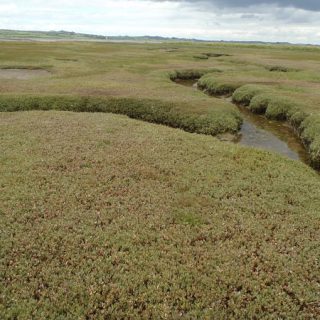 This is a distinctive saltmarsh community as it is dominated by shin-high, shrubby expanses of Atriplex portulacoides (mean maximum vegetation height = 40.9 cm, n = 33). Puccinellia maritima is also a constant species and if there are patches between the Atriplex it can be abundant. Frequently found in these patches are Aster tripolium Limonium humile, Spergularia media and Plantago maritima, while Suaeda maritima, Spartina agg., Triglochin maritimum, Salicornia agg. and Armeria maritima are occasional. Limonium binervosum agg. can be plentiful locally on sandy shingle banks. There can be an extensive algal mat but generally few macroalgae. Bostrychia scorpioides is often found growing epiphytically on the woody stems of the Atriplex.

This is a lower marsh community often found on top of the marsh cliff or next to creeks. It can occur on sand or shingle and is fairly frequently inundated. Atriplex portulacoides is sensitive to grazing which may explain the limited occurrence of this community along the west coast. Conditions are base-rich (mean pH = 7.6, n = 33).

This is a distinctive community that should be easily identified. In no other community does Atriplex portulacoides achieve such abundance.

Almost all examples of this vegetation qualify as EU HD Annex I habitat 1330 Atlantic salt meadows. It is typically a rather species-poor saltmarsh community (species/4 m2 = 5.7, n = 94), but the species that do occur are specialists.

The main immediate threats to this saltmarsh community are probably grazing by livestock and invasion by Spartina agg. It is usually absent or scarce where sheep or cattle grazing occur. Sea-level rises as a result of climate change will have an impact, particularly in areas susceptible to coastal squeeze.