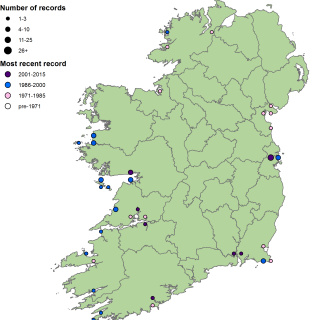 This community represents swampy stands of Bolboschoenus maritimus which is the only constant species and strongly dominates. Agrostis stolonifera frequently grows beneath and can be plentiful but usually provides little cover, while Aster tripolium and Triglochin maritimum are occasional. Less frequently, the Bolboschoenus may be accompanied by some Schoenoplectus tabernaemontani or Phragmites australis and these can on occasion be abundant.

This is a community of poorly-draining depressions and creeks of the upper saltmarsh and of estuaries and lagoon margins. Conditions are base-rich.

Bolboschoenus maritimus also occurs frequently in FW3D Phragmites australis – Agrostis stolonifera swamp, but in that community it does not grow so densely and saltmarsh halophiles are rarely seen.

This is typically a rather species-poor saltmarsh community (species/4 m2 = 5.4, n = 32). It may occur on the margins of the priority EU HD Annex I habitat 1150 Lagoons*.

These stands are typically unmanaged. They are probably too wet to be significantly impacted by grazing livestock. Sea-level rises as a result of climate change will have an impact, particularly in areas susceptible to coastal squeeze.