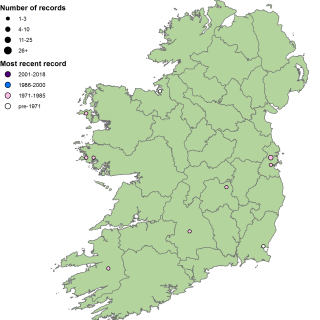 This is a relatively diverse weed community with sparse cover that is characterised by the presence of the neophyte Veronica persica and the archaeophyte Lamium purpureum. Alongside these species are usually found a less diagnostic assemblage of Senecio vulgaris, Poa annua, Stellaria media, Sonchus oleraceus, Capsella bursa-pastoris and Ranunculus repens. Frequently there may be some cover of Chenopodium album or Elytrigia repens.

This is a common weed community of fairly fertile circum-neutral, disturbed soils and is found growing amongst crops in arable fields, flower beds, and market and kitchen gardens.

From other weed communities, WE1C is distinguished mainly by the frequency and abundance of Veronica persica and Lamium purpureum.

Vegetation corresponding to this community is typically of relatively low conservation value. Segetal assemblages can contain archaeophytes such as Centaurea cyanus and Agrostemma githago which were once common sites of arable fields, but are now very rare. Species/64 m2 = 16.3, n = 101.