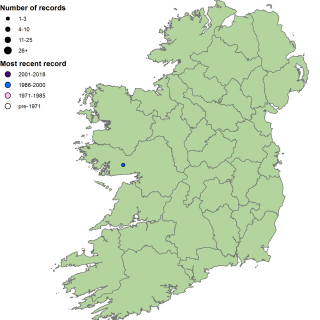 Lolium spp. form much of the cover in this rather diverse weed community, not only the widespread Lolium perenne, but also the much rarer Lolium temulentum (darnel). The scarlet flowers of Anagallis arvensis are also commonly seen here. Other constant species are Plantago lanceolata, Taraxacum officinale agg., Cerastium fontanum and Bellis perennis. Frequently one will find some cover of Ranunculus repens or Daucus carota or some clovers, either Trifolium pratense, Trifolium repens or Trifolium dubium. The archaeophytes Euphorbia peplus and Fallopia convolvulus may also be found.

This weed community has largely been recorded from traditionally farmed arable land on the Aran Islands, predominantly amongst rye crops.

From other weed communities, WE1D is distinguished mainly by the frequency and abundance of Anagallis arvensis and Lolium temulentum.

Vegetation corresponding to this community is typically of relatively low conservation value. Lolium tementulum was once a common weed of segetal communities but is now very rare in Ireland. Species/4 m2 = 17.7, n = 102.

The persistence of this community is dependent on the continuance of traditonal arable farming practices.