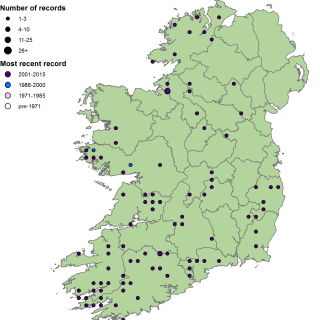 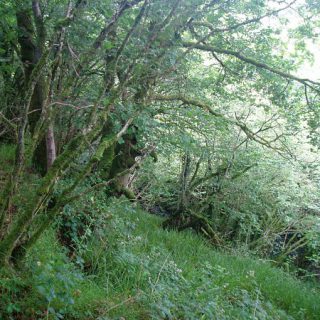 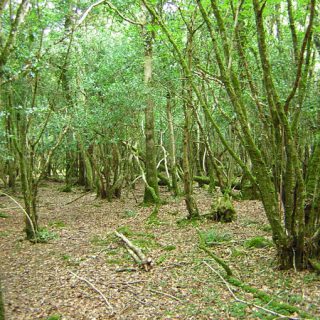 Dense stands of Corylus avellana are a key character of this community. It often manifests as high forest with hazel forming an understorey beneath a canopy dominated by Quercus petraea or hazel may form a lower canopy on its own (mean canopy height = 15.2 m, n = 115). Fraxinus excelsior is usually present but is seldom abundant. Betula pubescens is frequent here and occasionally there may be some sparse cover of Sorbus aucuparia. Corylus is usually joined in its strata by Ilex aquifolium and frequently by Crataegus monogyna. The main species in the field layer are Dryopteris dilatata, Dryopteris affinis, Hedera helix, Lonicera periclymenum, Blechnum spicant, Oxalis acetosella, Rubus fruticosus agg., Viola riviniana/reichenbachiana and Athyrium filix-femina. Other frequent species include Circaea lutetiana and Luzula sylvatica. Hyacinthoides non-scripta may form carpets of blue flowers in the spring. In the bryophyte layer, one could expect to find Thuidium tamariscinum, Isothecium myosuroides, Eurhynchium striatum, Kindbergia praelonga and Hypnum cupressiforme.

The greater abundance of Corylus avellana is the main way of differentiating between this community and others in group WL1. This community may be regarded as transitional to group WL2, and stands of WL1Cii could be confused with the hazel woodlands of WL2E. Those stands typically occur on shallow base-rich soils, however, and more frequently support a suite of species indicative of those conditions (e.g. Ctenidium molluscum, Geum urbanum, Potentilla sterilis, Fragaria vesca, Brachypodium sylvaticum).