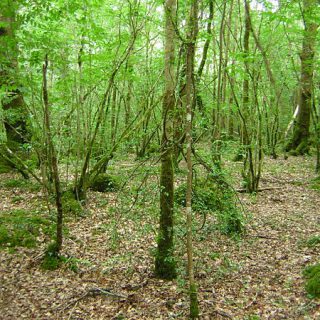 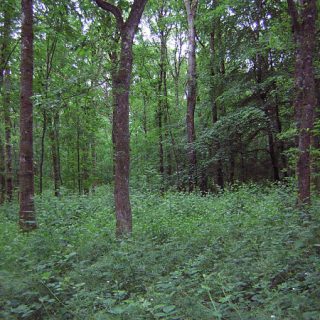 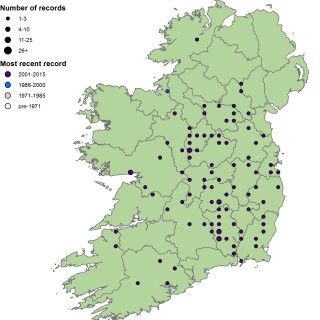 Quercus robur dominates the canopy of this high forest community (mean canopy height = 22.5 m, n = 109), accompanied by Fraxinus excelsior and, occasionally, Acer pseudoplatanus and Fagus sylvatica. Beneath, a mixed understorey can be found of Crataegus monogyna, Corylus avellana and Ilex aquifolium. There are few constants in the field layer, just Rubus fruticosus agg., Hedera helix, Dryopteris dilatata and Lonicera periclymenum. Brambles can form extensive thickets here when grazing is light or absent. Circaea lutetiana is the only frequent forb, although Geum urbanum, Viola riviniana/reichenbachiana, Hyacinthoides non-scripta, Geranium robertianum, and Oxalis acetosella are all occasionally encountered, as are the ferns Dryopteris filix-mas, Dryopteris affinis and Athyrium filix-femina. This community includes bluebell woodlands and carpets of these flowers may be seen during the spring. The bryophyte layer consists primarily of Kindbergia praelonga, Thuidium tamariscinum, Isothecium myosuroides, Hypnum cupressiforme and Eurhynchium striatum.

Quercus robur can be the main canopy species in community WL1A, but that community occurs on more acidic soils. Luzula sylvatica and Sorbus aucuparia are usually found in that community but are typically absent from stands of WL2A. Quercus robur is seldom as abundant as it is in the present community elsewhere in group WL2.

This is on average a fairly species-poor woodland community (total species/100 m2 = 24.2 n = 136) with a very limited bryophyte flora (bryophyte species/100 m2 = 7.0, n = 136). A low proportion of these stands may qualify as EU HD Annex I habitat 91A0 Old oak woodlands. Stands with high cover of non-native species (e.g. Fagus sylvatica or Acer pseudoplatanus) are typically of lower conservation value.

The main threats to these woodlands include woodland clearance and invasion by non-native species such as Fagus sylvatica. They may be grazed by deer or livestock so overgrazing can be an issue. Undergrazing may also occur, however, resulting in dense thickets of bramble that reduce field layer diversity.