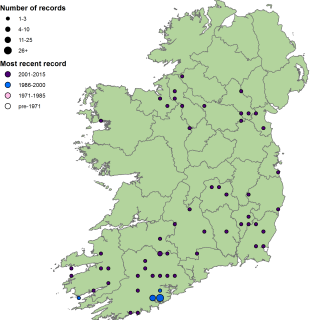 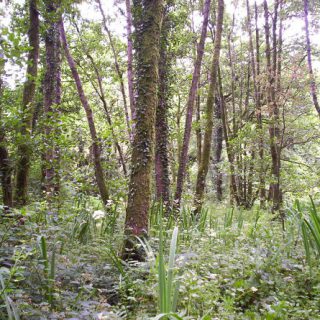 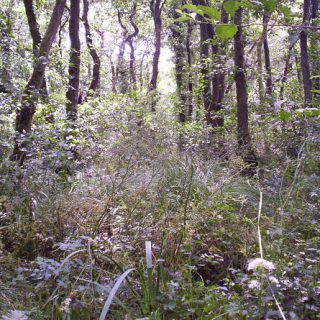 These are rather variable wet woodlands with on average a medium-height canopy dominated by Alnus glutinosa (mean canopy height = 14.4 m, n = 44). Salix cinerea and Fraxinus excelsior are frequent companions to the alder but Crataegus monogyna and Ilex aquifolium are only occasional in the understorey, so tree species diversity is not that high. The constants in the field layer are Rubus fruticosus agg., Ranunculus repens, Hedera helix, Filipendula ulmaria and Dryopteris dilatata. Bramble can form extensive thickets in the absence of grazing animals. Carex remota, Chrysosplenium oppositifolium, Juncus effusus, Agrostis stolonifera, Angelica sylvestris and Galium palustre are all frequent, and are occasionally joined by Mentha aquatica and Oenanthe crocata, so there is a suite of species indicative of wetter conditions. The bryophyte layer is rather scanty with only Kindbergia praelonga a constant presence, while Thuidium tamariscinum and Hypnum cupressiforme are frequent and Plagiomnium undulatum and Isothecium myosuroides are just occasional.

These alder stands occur mostly on fertile, base-rich gleyed soils, but can occur on well-drained mineral soils which are subject to periodic inundation, and also as alder carr on fen peats (mean organic content = 33.5%, n = 46). They are found mostly in the lowlands on flat ground next to rivers, on lakeshores or on flushed lower slopes (mean slope = 1.8°, n = 46; mean altitude = 71 m, n = 46), but can develop in stream valleys in the hills.

Alnus glutinosa is also an important component of both the wet ash woodland communities, WL3A and WL3C. In WL3B, however, Fraxinus excelsior is less frequent. Alnus is also a constant in WL3F, but that woodland has a greater dominance of Salix cinerea and quite a different ground flora from WL3B with Rubus fruticosus agg. being much scarcer.

This is on average a fairly species-rich woodland community (total species/100 m2 = 32.2, n = 69) but with a quite limited bryophyte flora (bryophyte species/100 m2 = 8.2, n = 69). Stands along rivers and lakes which are subject to periodic inundation qualify as EU HD Annex I habitat 91E0 Residual alluvial forests*.