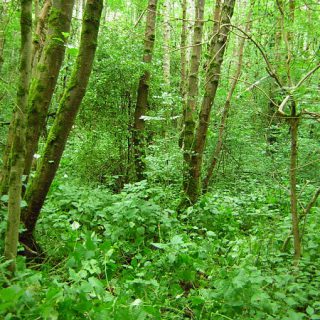 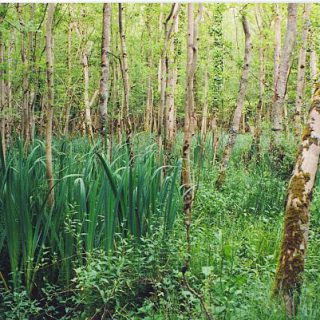 These stands are found mainly on gleys but also on well-drained mineral soils and basin peats (mean organic content = 40.5%, n = 55). Edaphic conditions are relatively base-rich and fertile. It is a community primarily of flat ground in the lowlands (mean slope = 1.2°, n = 55; mean altitude = 49 m, n = 55), occurring where there is waterlogging, or periodic inundation from rivers or lakes.

These stands are close to those of the other main wet ash woodland community, WL3A, and represent a less diverse variant. The present community also differs in that both Betula pubescens and Salix cinerea are less frequent. Conversely, Acer pseudoplatanus is more frequent here. Thuidium tamariscinum is notably less frequent in WL3C. Stands of WL3C occur on slightly more fertile soil than WL3A, reflected in the higher frequency of Urtica dioica.

This is on average a fairly species-rich woodland community (total species/100 m2 = 31.2, n = 66) but with a quite limited bryophyte flora (bryophyte species/100 m2 = 8.4, n = 66). Stands along rivers and lakes which are subject to periodic inundation qualify as EU HD Annex I habitat 91E0 Residual alluvial forests*.

The main threats to these woodlands include changes to hydrological regimes, overgrazing by livestock (usually cattle), woodland clearance and spread of non-native species such Acer pseudoplatanus.