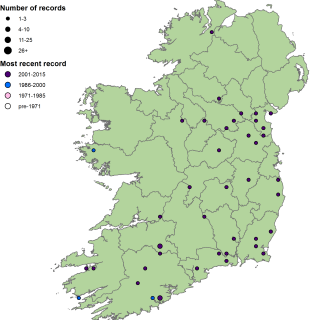 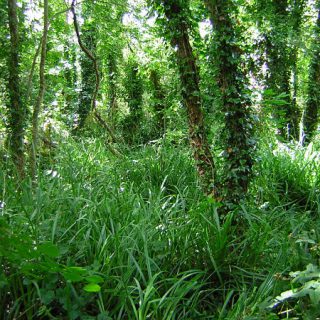 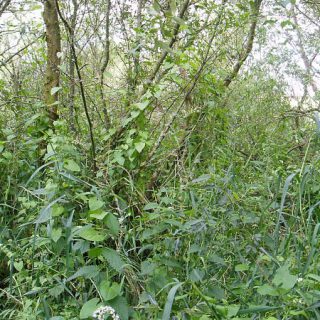 Two sub-communities are described for this community. The Salix fragilis – Calystegia sepium subcommunity (WL3Di) differs in the presence of one or more species of willow that are regarded as archaeophytes in Ireland (Salix fragilis, Salix alba, Salix viminalis or Salix triandra), although Salix cinerea is still present. The field layer is usually a dense tangle including Calystegia sepium, Iris pseudacorus, Oenanthe crocata, Rumex sanguineus, Phalaris arundinacea, Valeriana officinalis and Solanum dulcamara. This sub-community is rare in Ireland and restricted to periodically inundated lowland river islands and banksides. In the more common Crataegus monogyna – Dryopteris dilatata sub-community (WL3Dii), Salix cinerea is usually the only willow present and Crataegus monogyna sometimes occurs in a scanty understorey. The field layer differs in the occurrence of species less tolerant of inundation such as Geum urbanum, Geranium robertianum, Dryopteris dilatata, Athyrium filix-femina and Circaea lutetiana.

This is quite a species-rich woodland community (total species/100 m2 = 37.6, n = 36) with a reasonable bryophyte flora (bryophyte species/100 m2 = 10.3, n = 36). Stands along rivers and lakes which are subject to periodic inundation qualify as EU HD Annex I habitat 91E0 Residual alluvial forests*. These include stands of sub-community GL3Dii which are dominated by non-native willow species and might otherwise be deemed to be of lower conservation value.

The main threats to these woodlands include changes to hydrological regimes, overgrazing by livestock (usually cattle), woodland clearance and invasion by non-native species such as Impatiens glandulifera.