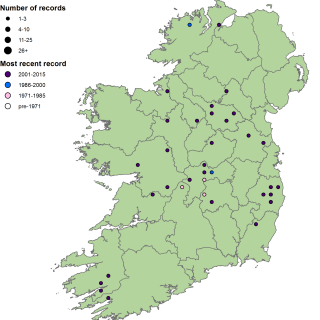 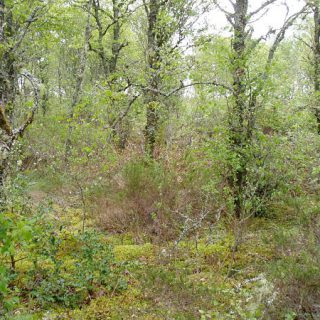 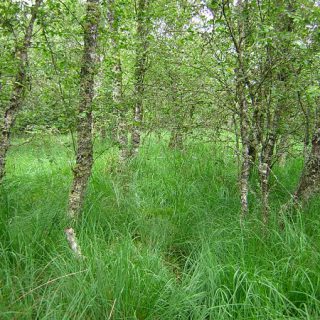 Betula pubescens is the sole constant of the low canopy of this community (mean canopy height = 12.7 m, n = 19). Salix cinerea is the only other tree species likely to be encountered, accompanying Betula in the canopy or forming an understorey. The field layer is often strikingly dominated by tussocks of Molinia caerulea, amongst which can also be found Dryopteris dilatata, Rubus fruticosus agg., Calluna vulgaris, Vaccinium myrtillus and Juncus effusus. A key characteristic is the usual abundance of Sphagnum species in the bryophyte layer, chiefly Sphagnum palustre, but also Sphagnum fimbriatum, Sphagnum capillifolium, Sphagnum recurvum agg. and Sphagnum squarrosum. Thuidium tamariscinum, Polytrichum commune and Hypnum jutlandicum are constants within this layer.

This community comprises open stands of birch woodland on soils with a fairly high water table or a high degree of flushing, typically occurring on basin peats or occasionally on peaty gleys (mean organic content = 78.1%, n = 19). It is often found in peaty hollows at higher altitudes but also included here are stands of intact and degraded raised bog systems in the lowlands (mean altitude = 105 m, n = 19). Consequently, it largely occurs on level ground (mean slope = 0.6°, n = 19). Soils are very acidic and markedly infertile.

Two sub-communities have been described for this community. In the Calluna vulgaris – Eriophorum vaginatum subcommunity (WL4Ci), bogland species are abundant and Pinus sylvestris may occur. The Rubus fruticosus – Potentilla erecta sub-community (WL4Cii) is somewhat less boggy and lacks these indicators, but Molinia caerulea and the titular species are more frequent.

Molinia caerulea is also a prominent plant within the wet birch woodlands of community WL4E. That community, however, is not as highly acidic and oligotrophic as WL4F, so Sphagnum and most of the other indicators of bogs are infrequent.

These stands are threatened by any impacts that may alter the hydrological regime. Stands on intact raised bog are particularly vulnerable to the impacts on the water table that result from nearby turf-cutting. Other threats include overgrazing by deer or livestock, woodland clearance and invasion by non-native species such as Rhododendron ponticum.