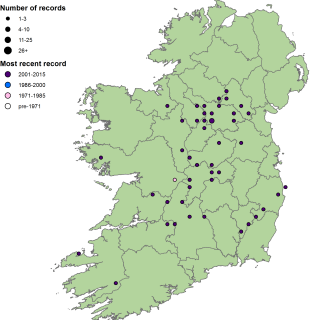 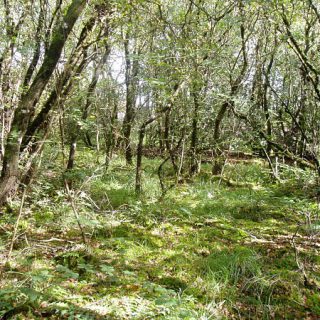 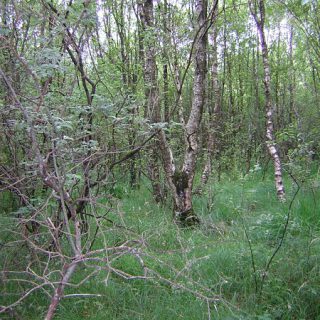 This is a wet woodland community in which Betula pubescens and Salix cinerea form the low canopy (mean canopy height = 12.9 m, n = 52). Fraxinus excelsior is a typically present and Ilex aquifolium is frequent but neither are ever abundant. Crataegus monogyna is occasional in the understorey as is Salix × multinervis (note that Salix aurita is seldom found within woodland). Rubus fruticosus agg., Molinia caerulea, Hedera helix, Dryopteris dilatata, Potentilla erecta and Galium palustre are constants in the field layer. In some stands bramble can form extensive tangles, in others there can be a dense sward of Molinia tussocks. These are frequently accompanied by mesotrophic species of wet soils including Juncus effusus, Filipendula ulmaria and Holcus lanatus. As usual in Irish birch woods, Thuidium tamariscinum is a constant in the bryophyte layer growing with Kindbergia praelonga and Scleropodium purum. Calliergonella cuspidata is usually found on the wetter ground. Sphagnum species are only occasional.

These are predominantly stands of wet, acidic basin peats and to a lesser extent gleys (mean organic content = 74.6%, n = 59) and occur in the lowlands on flat ground (mean slope = 0.8°, n = 59; mean altitude = 75 m, n = 59). They are commonly associated with degraded bogs, particularly smaller bogs or the lagg zone of large ones, where there is some groundwater intrusion. Soils are typically quite infertile.

These stands differ from the willow woodlands of group WL3 in the greater presence of birch, occurring on more acidic and less waterlogged soils. Molinia caerulea also occurs in the boggy woods of community WL4C, but is there usually accompanied by a carpet of Sphagnum not typically found in the more mesotrophic conditions of WL4E. Salix cinerea is less frequent and less plentiful in most of the drier birch woodland communities (WL4A, WL4B and WL4F) although it comes close in examples of WL4D.

The main threats to these woodlands include changes to the hydrological regime, overgrazing by deer or livestock, woodland clearance and invasion by non-native species. Undergrazing may also occur, however, resulting in dense thickets of bramble that reduce field layer diversity.