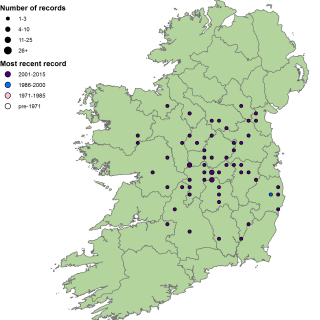 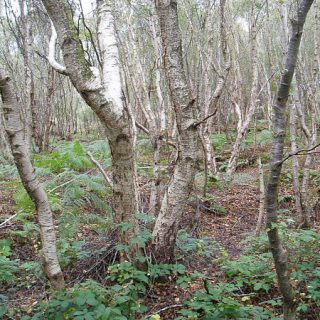 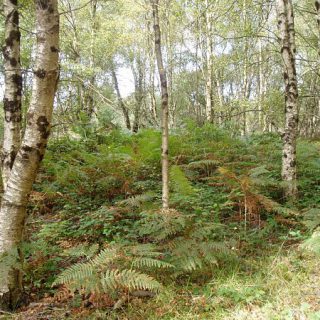 The low canopy of this woodland community is dominated by Betula pubescens (mean canopy height = 13.3 m, n = 54). Amongst the dense birch trunks, Salix cinerea and Ilex aquifolium also frequently occur and the occasional Sorbus aucuparia may be found, but other tree species are scarce. The field layer comprises mainly Rubus fruticosus agg., Dryopteris dilatata, Hedera helix and Pteridium aquilinum; bramble often forms extensive thickets while the relatively thin canopy allows patches of bracken to persist. Tufts of Molinia caerulea typically occur and less often some Dryopteris carthusiana or Rubus idaeus may be seen. The bryophyte layer is typically rather patchy with Kindbergia praelonga, Scleropodium purum and Thuidium tamariscinum being the mainstay species.

From other fairly dry birch woodlands, community WL4F may be distinguished by the high frequency of Pteridium aquilinum. It also lacks the grassy component of community WL4B and the Vaccinium myrtillus usually found in community WL4A.

The main threats to these woodlands include overgrazing by deer or livestock, woodland clearance and invasion by non-native species such as Rhododendron ponticum. Undergrazing may also occur, however, resulting in dense thickets of bramble that reduce field layer diversity.