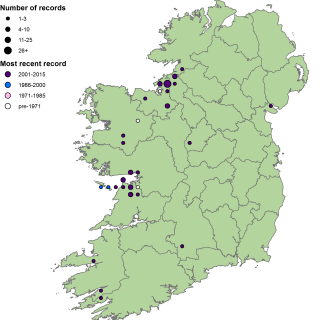 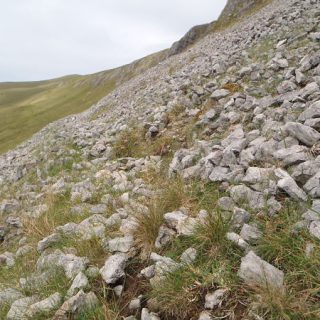 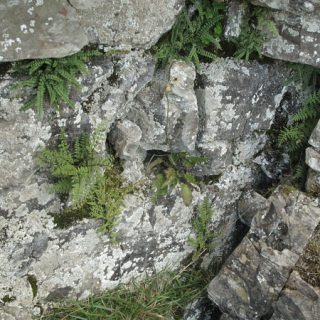 This is a rather variable community with typically no dominants and with just five constant species, Sesleria caerulea, Thymus polytrichus and the calcicole mosses Ctenidium molluscum, Tortella tortuosa and Neckera crispa. Ferns are a feature with Asplenium trichomanes, Asplenium ruta-muraria and Cystopteris fragilis all occasionally encountered. Asplenium viride is a rarer find. The main forbs are Thymus polytrichus, Campanula rotundifolia, Euphrasia officinalis agg., Viola riviniana and Geranium robertianum but the non-native species Epilobium brunnescens is also a feature here, particularly on wet cliff faces. Patches of Fissidens dubius and Breutelia chrysocoma are frequent additions to the bryophyte layer.

This is a rather sparsely vegetated rocky habitat community (mean extent of bare rock = 45.7%, n = 70) that occurs in range of habitats comprising crevices on calcareous cliffs, scree slopes and limestone pavements (mean altitude = 310 m, n = 61; mean slope = 44.7°, n = 58). Where pockets of soil have accumulated, they are skeletal (mean soil depth = 1.7 cm, n = 46) and conditions are moist, base-rich and infertile.

Open limestone pavement vegetation is also represented by the RH1B Teucrium scorodonia – Mycelis muralis pavement community. However, Teucrium and Mycelis are much more frequent in that community, as are a number of woody species: Prunus spinosa, Hedera helix, Corylus avellana, Rubus fruticosus agg. and Rosa spinosissima. The present community also shares several species with the RH2D Angelica sylvestris – Breutelia chrysocoma ledge community, but that is an assemblage of wetter, less base-rich conditions where ferns are much less prevalent.

Many examples of this community qualify as EU HD Annex I habitat 8120 Calcareous rocky slopes but also included here are plots from the priority habitat 8240 Limestone pavement* and from habitat 8120 Calcareous scree. This vegetation supports localised species including Saxifraga aizoides and Orthothecium rufescens. Species/4 m2 = 26.1, n = 39.

Accessible upland examples of this vegetation may be sheep-grazed. Climate change threatens arctic-alpine species which are restricted to upland sites. The impact of the non-native Epilobium brunnescens has not been investigated and hitherto no known management action has been taken. Limestone pavement sites are traditionally winter grazed by cattle and the main threats there are scrub encroachment, quarrying and destruction for purposes of agricultural improvement.