Amid worries about declines in Irish bees, one solitary bee species is bucking the trend and has just arrived.

The Ivy Bee (Colletes hederae) has migrated from Britain to set up home in Ireland for the first time. The first sighting was made at the Raven Nature Reserve by recorder Jim Kenny on the 12th October 2021. A specimen was taken and sent to the National Biodiversity Data Centre where it was confirmed by Owen Beckett. It will now be deposited in the Natural History Museum.

Jim Kenny said: “As an amateur wildlife photographer and avid macro photographer, I knew I had found something different when I came across the colony of bees. I had never seen mining bees so late in the Raven Nature Reserve before.  After 30 mins of taking pictures, I rushed home and submitted a few to Biodiversity Ireland for identification.  It was with great surprise that I was told I had a first for Ireland. I feel truly blessed and honoured.” 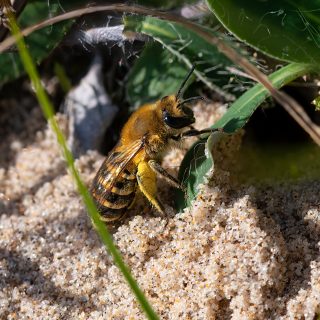 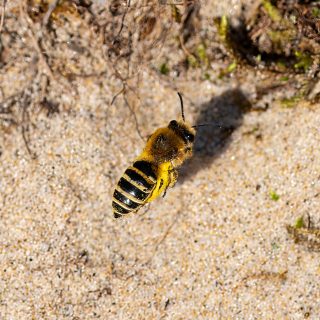 The Ivy bee, photographed at the Raven Nature Reserve on 12th October 2021

Owen Beckett, who is currently working in the National Biodiversity Data Centre, said “The Ivy Bee is a wonderful addition to Ireland’s fauna. We had been expecting it to arrive here for a few years now and it’s fantastic that it is finally here.”

Ireland now has 100 different bee species, including the honeybee, 21 different bumblebee species, and 78 different solitary species. The Ivy bee is a solitary bee species and is slightly bigger than a honeybee. It has a ginger thorax and distinct orange/yellow stripes on its abdomen. It feeds mainly on the nectar of Ivy flowers and can be seen from early September to early November when this plant is in bloom.

The Ivy bee was first recorded in Britain in 2001 and has been slowly expanding northwards. Typically, new bee species are first found on the east coast of Ireland, when there are sufficiently large populations on the west coast of Britain and the weather conditions are favourable for migration.

Unfortunately, Irish pollinators are declining with one third of wild bee species known to be threatened with extinction from the island. To tackle the problem, the All-Ireland Pollinator Plan was established in 2015.  “The Pollinator Plan is about making Ireland a place where pollinators can survive and thrive. It is fantastic that the Ivy bee has naturally arrived, to add to the diversity of our wild pollinators” said Dr Úna FitzPatrick, Senior Ecologist at the National Biodiversity Data Centre and co-author of the Plan.  “We have fantastic teams of volunteers who have become interested in learning about pollinators and helping us drive their conservation by submitting data on what they see. Their skill is evident by how quickly they spot new and unusual things.”

Ivy bees nest in loose, light or sandy soil on southern-facing banks and cliffs with Ivy nearby for foraging. In Britain, they are common in urban and farmland settings, as well as coastal and heathlands. They are solitary bees, but when conditions are suitable, there may be thousands of nests in the same area.

If you think you’ve spotted this species, please take a photograph, and submit it to the National Biodiversity Data Centre https://records.biodiversityireland.ie/record/solitary-bees

See this factsheet on how to correctly identify the Ivy bee: 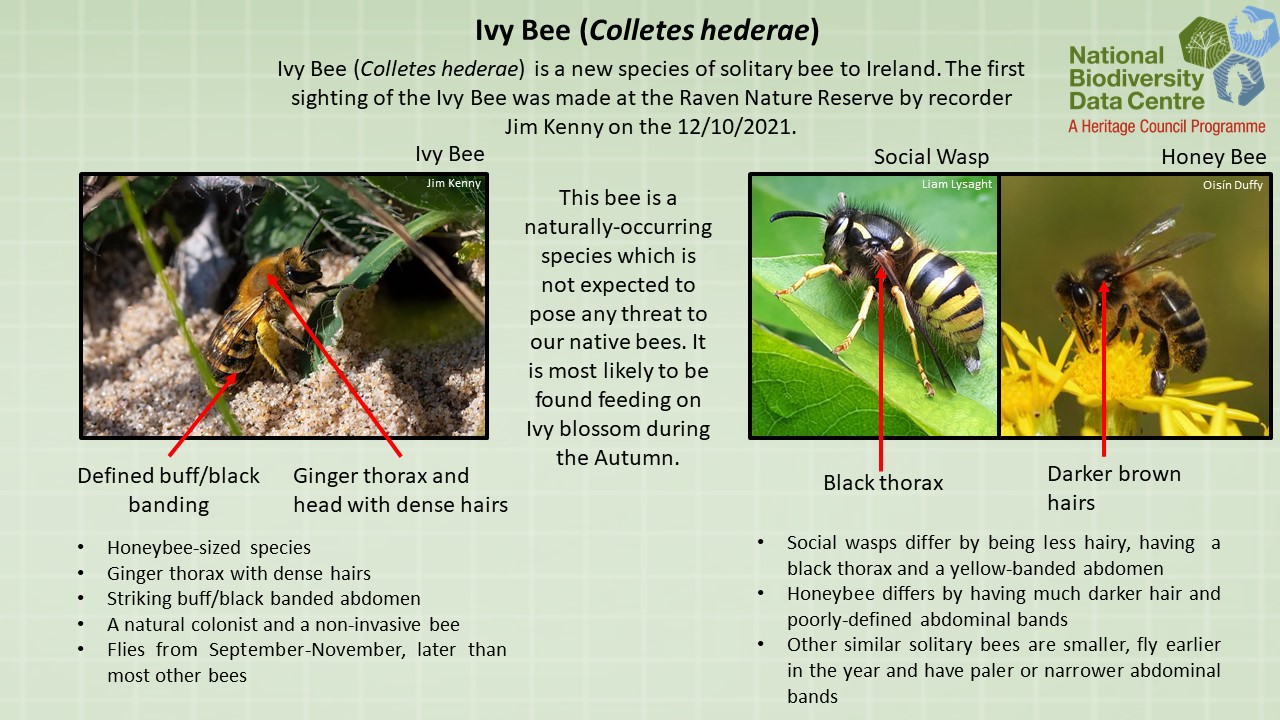 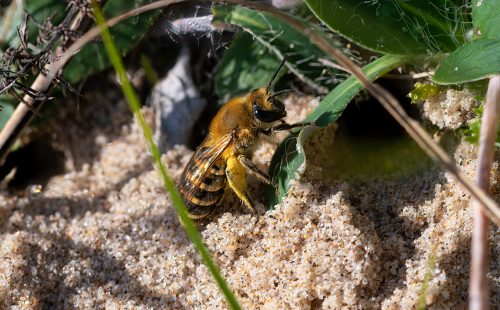