With the recent release of a global scientific review confirming that more than 40% of insect species are declining and a third are endangered, many have been asking if this threat of “catastrophic collapse of nature’s ecosystems”, is being detected by citizen scientists in Ireland.

Coordinated by Dr Tomás Murray, Senior Ecologist at the National Biodiversity Data Centre, the Irish butterfly and bumblebee monitoring schemes have revealed rates of decline in these important insects in line with the worldwide study.  “Sadly yes, across the 120 sites in our butterfly monitoring scheme our recorders have detected an average annual decline of 2.6% over the past 10 years, slightly above the global average of 1.8%.  Similarly, across the 100 sites in the bumblebee scheme, our recorders have observed average declines of 3.7% per annum over the past six years, markedly above the 1.0% global average.”

“Whenever we release these figures we commonly get people responding saying “but there’s loads in my garden”, and that may be true for that lucky person in their one garden but across over 220 sites now walked for bumblebees and butterflies all over Ireland this is certainly not the case.”

Ireland has 11,500 species of insect representing one third of all species found on our landscapes and seascapes.  However, to date only 1,051 (9%) have had their conservation status assessed: 26 (2%) species are now regionally extinct, 194 (19%) are in decline of which 130 (13%) are threatened.   In addition, until the establishment of the National Biodiversity Data Centre in 2007, Ireland lacked any national systematic insect monitoring schemes and had no way of estimating long-term trends in its insect populations.

Dr. Murray emphasises that the global study and our national insect monitoring schemes are not being biased by rare and sensitive species, but quite the opposite: “What’s really frightening is that these trends largely reflect changes in our commoner species of insect as these form the bulk of insects detected by researchers and citizen scientists.  Therefore, these declines are not just measuring losses in rare specialists but actually in our widespread generalist species.”

It is only thanks to the generosity of 180 citizen scientist volunteers across over 220 sites who take part in these monitoring scheme that these declines can be detected. Volunteers walk a fixed route 1-2km walk once a month from March to October for bees, or April to September for butterflies and count the number and type of each insect they observe using a standardised methodology. Dr Murray is very aware of how this research is supported by volunteers: “When the numbers are compiled at the end of every season it’s humbling to see how much effort everyone is willing to give to support insect monitoring and conservation. Each year these amazing volunteers collectively walk on average of 3,740 km over 2,040 hours, counting 51,100 insects across 48 species, putting us streets ahead of many of our European neighbours in tracking change in these important animals.”

However, the network of citizen scientists involved in these scheme needs to grow both in size, to successfully detect and monitor rarer species, and in scope so that changes in other key insect groups like predatory beetles and dragonflies can tracked too.  “The support we receive from volunteers in these schemes is tremendous, but we have to reciprocate and secure sufficient resources to ensure that the co-ordination, training support, management, analysis and reporting of their data is of international standard”.

About the Irish Bumblebee Monitoring Scheme

The Irish Bumblebee Monitoring Scheme was piloted in 2011 and launched in 2012. It is a long-term citizen science project designed to track changes and detect the early warning signs of a general threat to bumblebees and to Irish pollination services.  Our citizen scientists record all bumblebees along specific routes over a fixed time and area, walking once a month between March-October (eight counts p.a.). It is one of the first national citizen science schemes in worldwide that tracks changes in wild pollinator populations.

Now in its eight field season, the monitoring scheme is now the largest it has ever been, with 74 recorders now monitoring bumblebee populations across 103 sites [map – bumblebee monitoring sites]. It’s humbling to see how much effort everyone is willing to give to support bumblebee monitoring and conservation.  In 2017, we collectively walked 883.2 km over 491 hr 19 min and counted 12,969 bumblebees across 14 species.

About the Irish Butterfly Monitoring Scheme

The Irish Butterfly Monitoring Scheme was piloted in 2007 and launched in 2008. It is a long-term citizen science project designed to track changes in Irish butterfly populations, to inform their conservation and as indicators of landscape and climate change.  Our citizen scientists record all butterflies along specific routes over a fixed time and area, walking once a week between April-September (max. 26 counts p.a.).  Ireland is one of 22 countries across Europe that pool systematic butterfly data together collectively across 4,500 sites each year on behalf of the European Butterfly Monitoring Scheme.  These data are then analysed and published as the Pan-European Grassland Butterfly Indicator on behalf of the European Environmental Agency.  This indicator shows that since 1990 the abundance of grassland butterflies across Europe has declined by 30%.

Now in its 12th field season, the monitoring scheme is supported by 118 recorders monitoring butterfly populations across 123 sites [map – butterfly monitoring sites].  In 2017, we collectively walked 2,858 km over 1,546 hrs and counted 38,186 butterflies across 34 species.

Senior Ecologist & Coordinator of the Butterfly and Bumblebee Monitoring Schemes 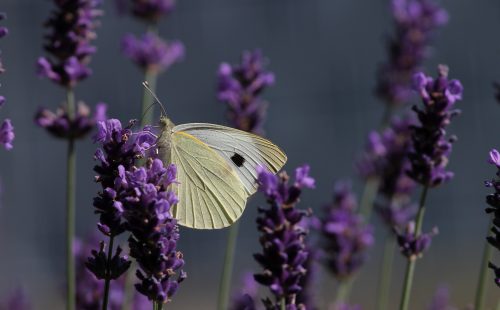