The National Biodiversity Data Centre, based down in Co. Waterford, is inviting members of the farming community throughout Ireland to participate in a new recording scheme – Farmer’s Wildlife Calendar – Climate Tracker. The recently launched scheme aims to unravel some of the impacts that a changing climate is having on Ireland’s biodiversity and its four seasons.

Many people are familiar with the human urge to categorise everything into nice and neat arrangements such as our seasons and the dates upon which they fall. However, it’s well understood that nature doesn’t tend to follow the same rules that we apply to ourselves. For instance, some believe that the transition from winter to spring occurs on the 1st of February, whereas for others it’s the 1st of March. But for nature, a particular date on the calendar does not signal the time to bud, or the time to breed. For species of plants and animal that occur in our grass verges, our small ponds and our hedgerows, factors such as temperature changes or the length of daylight indicates to them that it is time to progress to the next stage of the life cycle. We recognise the study of these phenomena as the study of phenology, which centres on the timing of naturally recurring seasonal activities of plants and animals such as for example frog spawning or plants flowering. Crucially, the timing of these natural events are highly sensitive indicators of climate change.

Farmers across Ireland are being asked by the National Biodiversity Data Centre to submit sightings of the first time each year that they encounter some of these natural seasonal events. A list of eight naturally recurring events has been put together to focus efforts and includes amongst others the appearance of frog spawn on your farm, the first time you see your blackthorn hedge flowering, the emergence of the orange-tip butterfly and the arrival of the cuckoo, commonly signalled when one hears  the familiar “cuckoo-cuckoo” song for the first time in any given year.

Remarking on the recording scheme, Liam Lysaght, Director of the National Biodiversity Data Centre captured the importance of such initiatives and the value of the information it can produce. “Fundamentally what we are trying to achieve here is the construction of a more detailed picture of our environment, and how it is responding to a changing climate. The ecological consequences of such change are still largely unknown but if early indications are anything to go by, we are beginning to witness a mismatch between the timings of certain intertwined natural events that should normally be occurring at the same time. For example studies abroad have suggested that the changing climate is leading to the emergence of pollinators before certain plants they rely on for pollen and nectar begin to flower, or for example the affect caused to insectivorous woodland birds that are hatching too late to feast on early emerging and abundant caterpillars, or for instance a disruption of synchrony between the arrival of migrating birds at refuelling sites and food availability.”

“How is climate change affecting timings in Ireland? That is the question we want to try shed more light on here”, Lysaght added.

Farmers are very familiar with a whole variety of naturally recurring events as they know their land and observe these events each season. They also satisfy the need for participants of the study to choose recording locations that can be visited regularly, ideally as part of a normal routine. Recording these naturally recurring events and species in the same location each year offers the best quality records.

Recording one’s observations is simple and very little time and effort is needed by the recorder to partake. For each of the eight species and events, once you have made your observation for the first time in a given year, you won’t need to record them again on your patch until the following year. Be sure to keep a note of the date of your observation and report your seasonal sighting using an online recording form created especially for the initiative which can be visited at the website of the National Biodiversity Data Centre, www.biodiversityireland.ie. 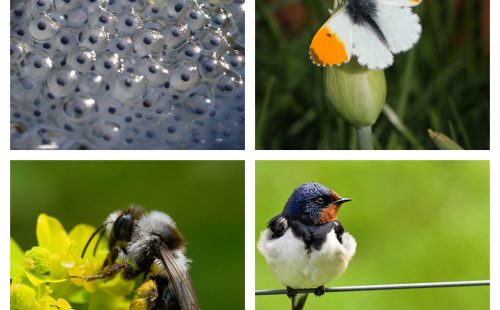