More than 3,000 delegates representing 196 governments & NGOs assembled in Egypt recently for the 14th meeting of the Conference of Parties to the Convention of Biological Diversity. The 196 Governments, including Ireland, agreed to scale up investment in nature and people, which is welcome news. However, watching the event from a distance, I couldn’t but help get the impression that the world’s largest forum to address the biodiversity crisis lacked energy, ambition and determination. At a time when the scientific evidence of the biodiversity crisis facing the planet is all too clear, it was astonishing that the gathering attracted little if any coverage in national media within Ireland.

The global gathering could not have come at a more significant time. Just weeks earlier, the World Wildlife Fund for Nature published its Living Planet Report for 2018. The Living Planet Report 2018 provides a platform for the best science, cutting-edge research and diverse voices on the impact of humans on the health of our planet Earth. More than 50 experts from academia, policy, international development and conservation organizations have contributed to the report. This report has credibility.

This Living Planet Index is ‘an indicator of the state of global biodiversity and the health of our planet and it tracks the population abundance of thousands of mammals, birds, fish, reptiles and amphibians from around the world’. It uses the trends that emerge as a measure for changes in biodiversity; a surrogate measure for the health of the planet on which we live, and we depend.  The Living Planet Report 2018 reports there has been an astonishingly steep fall of 60% in biodiversity over the last 40 years.

And this finding should not come as a surprise to anyone, as earlier this year the Intergovernmental Science Policy Platform for Biodiversity and Ecosystem Services (IPBES) published its three-year long assessment of pressures and trends in biodiversity, and it reports on a similar trend across the continents, including Europe. And even as a small island off the west coast of Europe, Ireland is not immune from these trends. Of the 3,000 or so species that have undergone a Red List conservation assessment, on average one in every three or four species is threatened with extinction here.  This is a truly shocking legacy that we are handing on to future generations. The most succinct summation of where humanity is at, is the statement contained in the Living Planet Report 2018 that ‘we are the first generation that has a clear picture of the value of nature and the enormous impact we have on it. We may also be the last generation that can act to reverse this trend’. Sobering words indeed.

All this shows is that biodiversity is a vast global network that recognises no political boundaries. Addressing the biodiversity crisis requires bridging the gap between the local and global.

It was against this background that the National Biodiversity Data Centre welcomed the global bioinformatics community to Kilkenny in early October, hosting the 25th meeting of the Global Biodiversity Information Facility’s (GBIF) Governing Board.  GBIF is a huge global network of 59 participant countries and 38 international organisations, all working together using common data standards to promote the sharing of vast amounts of information on where and when species have been recorded across the planet. Ireland is part of that global network, with the National Biodiversity Data Centre serving as Ireland’s GBIF Node.

The evidence shows that now, more than ever, we need to have robust data and information to build the scientific evidence on how biodiversity is changing at the global, regional, national and local levels. Like the management of any natural resource, we need fit for purpose information management systems; if we don’t know what we have, how can we conserve it? This means providing access to as much data as we can, for researchers and policy makers to use in their work. And earlier this year GBIF has exceeded the 1 billion records published, making it the largest source of biodiversity data on this planet. And we know these data are being used, for every day on average two peer-reviewed papers are published that use data obtained from the GBIF data portal.

It was exciting to have the global GBIF network in Kilkenny to explore how the research infrastructure it has built can become even more central to affecting societal change in developed and developing countries. Building on the opportunity of having GBIF in Kilkenny, the Data Centre hosted a symposium – Biodiversity loss in a changing world: local data, global action -to introduce delegates to the global work of GBIF and highlight some regional data and information needs to address the challenge of biodiversity loss. Part of the symposium showcased some of the exciting work that is being done at the local level within Ireland by NGOs, local authorities and citizen scientists.

Delegates from all over the world travelled to Kilkenny in October to attend the Governing Board meeting of the Global Biodiversity Information Facility.

The feedback from the international delegates attended the symposium was that Ireland really is to the fore in terms of bringing added value to data collection and making it available for citizen engagement, promotion and action at the ground level. Perhaps small steps in the overall context of the crisis we are facing but, nonetheless, steps in the right direction. What it shows is that Ireland is well placed to deliver biodiversity conservation if we can get more buy-in from our politicians and a scaling up of investments in nature and people, as the Irish Government has agreed to do at the Convention on Biological Diversity meeting in Egypt less than two weeks ago. The National Biodiversity Data Centre has the energy, ambition and determination to drive the evidence-base to support the conservation of biological diversity within Ireland; all we require is the resources to allow us to reach our ambition. 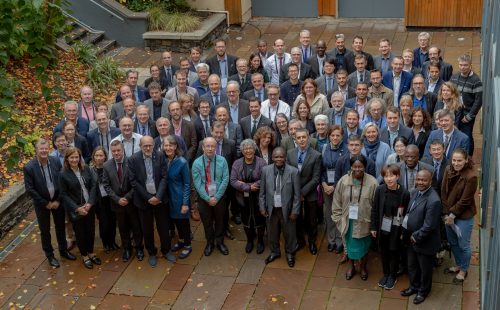