The search for rare Irish plants

Some people know I really like wild bees. Here’s a secret: I like wild plants even more! There are 98 amazing wild bee species in Ireland, but almost 1,000 native plants!

Some of my earliest memories are of collecting plants with my Dad. He’s a retired biology teacher. Before his time, I now realise. In the midst of the Troubles in the North, with regular chinooks landing in the RUC base right beside his school, he was teaching boys about cross-pollination using pin and thrum-eyed Primroses. Primroses are adapted for cross-pollination, with the pollen from pin-eyed flowers pollinating thrum-eyed flowers and vice-versa. Primrose also produces tiny seeds that are often dispersed by ants – so much for us to learn and only one flower out of thousands!

I’m not sure why I like plants so much. I think it’s knowing that you could spend a lifetime studying them and never fully understand how they work. I do know I love the rhythm they provide. I like seeing Lesser Celandine in winter, knowing that in May, Elder will be flowering, and then seeing Knapweed in late summer. I think they also link us back to a mindfulness that we’ve always had in Ireland, long before it had a name, or we had to think about it. I know I might not be typical, but I think seeing our wild plants in flower as you go about your day does you good.

You don’t have to go far to see interesting plants. Bright blue spring gentians in the Burren in May are a sight to behold, but there are lots of beautiful plants much closer to home. I live in a city; my house is 500m from the nearest shop – yet even that short walk yields so much. Growing in a crack in our doorstep is a tiny little plant with white flowers called Rue-leaved Saxifrage. It appears each year in late February. Saxifraga is the Latin word for ‘stonebreaker’ and it loves to root in little crevices.  Growing at the edges of our small front lawn, almost year-round, is Red Dead-nettle. This is an amazing plant for pollinators and is a lifesaver for hungry bumblebees in early spring.

Along the footpath at the base of a wall yields all sorts of amazing flowers. Lamb’s Lettuce is a tidy little bushy plant. It’s also highly nutritious, containing vitamins C, E and B9 and beta carotene. It’s supposed to taste best in spring during the lambing season! They knew this in the past and it was introduced into the kitchen garden by Louis XIV’s gardener. Part of nature’s vast larder, that we all but ignore now. The wall itself is new but has plenty of cracks and crevices which plants love. There is the beautiful little fern, Maidenhair Spleenwort. There is also a plant called Ivy-leaved Toadflax. With long roots, this plant is great at hanging onto walls. It has an ingenious way of planting seed. The flowers turn towards the sun until they have been fertilised. After this, they then turn towards the wall and push the seeds into any little crevice possible. This plant was introduced into Ireland in the 17th century from Mediterranean countries.

One of my favourites is another non-native species called Mexican fleabane. This one always grows in just the same spot each year on top of a wall outside a pub. Originally from Mexico, it was introduced into gardens in the mid-19th century and has now established itself in the wild in several locations around the country. It’s like a Daisy; but its posher and more elegant cousin.

My favourite wild plant is the Field Forget-me-not. It’s very common and you might not even notice it, but it’s always worth stopping to look at its beautiful tiny blue flowers. There are lots of legends around the name ‘Forget-me-not’.  I like the one about the medieval knight best. It’s said he was walking with his lady beside a river and picked a posy of flowers for her. As he leant over to collect more, his heavy armour caused him to lose his balance and he fell into the river. As she looked on in horror, he threw her the posy of flowers and shouted out ‘Forget-me-not’.

I think the author Iris Murdoch had it right when she said: “People from a planet without flowers would think we must be mad with joy the whole time to have such things about us.”

What I’ve discovered I like most of all is finding rare plants.  There was a selfishness to setting up the Rare Plant Monitoring scheme in the National Biodiversity Data Centre in 2017. It’s what I like to do myself. Some plants have always been rare; others were common but have declined into rarity as they struggle to survive in our modern landscape. Regardless of the reason why, all rare plants are at very high risk, so it pays to keep an eye on them.

Once you find a plant you know is rare, you develop an odd protectiveness towards it. I don’t want to stand guard over it – nature is very cruel, and I have no problem accepting that – but I do want to go back each year to see how it’s doing. If it’s being wantonly destroyed I want to document that.

Across Ireland, people who find rare plants growing near them have been visiting their population once a year and counting how many individuals they see. They submit that annual data to the National Biodiversity Data Centre and over time we can use it to track and monitor how these plants are doing. This will give us early warning signs of problems and hopefully help us protect these rare plant populations into the future.

The rare plant I monitor is a grass called Meadow Barley. To most people it’s probably not exciting but each June I look forward to visiting the site close to my house when I know it’ll be flowering. There is always a bit of trepidation that it’ll still be okay. Even for a naturally rare plant, it’s not doing great in all honesty. Maybe I am just documenting its slow disappearance at that site, but I still feel I’m doing something to help its plight – even if just to highlight that maybe this species of grass is in more trouble than we’d realised. The real power of the Rare Plant Monitoring Scheme will be in having more people take part. If there were multiple people monitoring different remaining populations of Meadow Barley across Ireland, we’d have a much better understand of whether it’s really disappearing from Ireland or if it’s just struggling on my site. It’s the same for all our other rare species. Monitoring data is invaluable.

Anyone can submit their sightings of plants to the National Biodiversity Data Centre, regardless of how common the species, and all records are very gratefully received. For those more experienced recorders who know they have a rare species near them, it would be great if you’d consider joining the Rare Plant Monitoring Scheme. 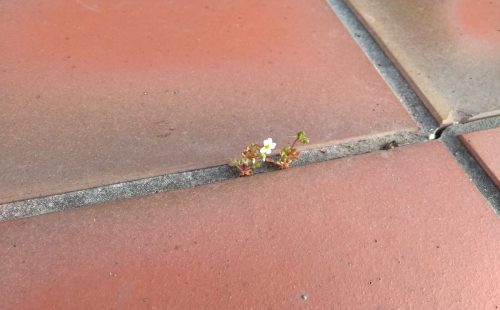