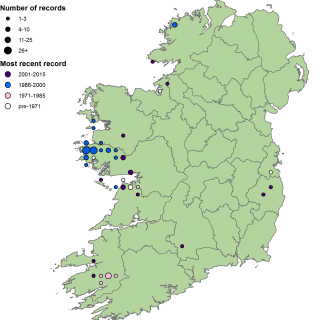 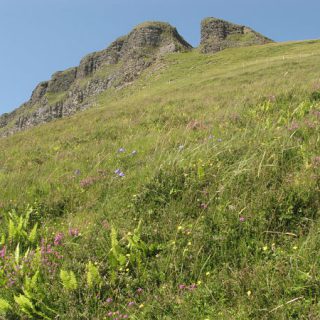 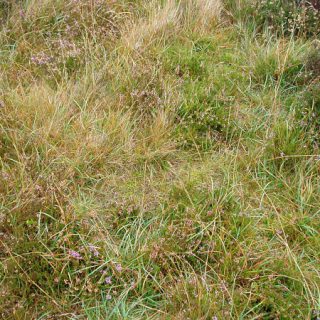 Calluna vulgaris dominates this rather grassy heath community. Alongside it are usually found Erica cinerea and Potentilla erecta, together with patches of Agrostis capillaris and Anthoxanthum odoratum. Frequent species are Agrostis canina/vinealis, Galium saxatile and Carex binervis, contributing an element of upland grassland. Spreading rosettes of Blechnum spicant or tufts of Molinia caerulea may also be encountered. Pleurocarpous mosses form most of the bryophyte layer; Hylocomium splendens and Thuidium tamariscinum are constants here, but Hypnum jutlandicum, Scleropodium purum, Pleurozium schreberi and Rhytidiadelphus squarrosus are all frequent.

Two sub-communities are described. The Daboecia cantabrica – Lotus corniculatus sub-community (HE2Ci) is essentially a regional variety of mid-west Ireland. Daboecia cantabrica is a constant species here, whilst Hypericum pulchrum, Lotus corniculatus and Plantago lanceolata are frequent to occasional, so edaphic conditions can be somewhat basic. The Carex binervis – Rhytidiadelphus loreus sub-community (HE2Cii) is the more widespread and acidic type in which grasses such as Deschampsia flexuosa, Nardus stricta and Festuca vivipara may be found.

This community lacks the Ulex gallii bushes of HE2A and is grassier than HE2B. In HE2D, one will find greater abundance of Molinia caerulea and Erica tetralix; this latter species seldom features in the present community. In HE2E, one will usually find Trichophorum cespitosum/germanicum.

Most examples of this vegetation qualify as EU HD Annex I habitat 4030 Dry heaths. Some could be regarded as 4010 Wet heath where Molinia caerulea is more plentiful. This community is on average a species-rich heath community (species/4 m2 = 21.9, n = 117).

These heaths, which often form parts of commonages, may be used as rough grazing land (typically for sheep). Burning may be periodically used across large areas to suppress the dwarf shrubs and encourage grass growth. Overgrazing can also be a problem. Another threat is agricultural improvement.