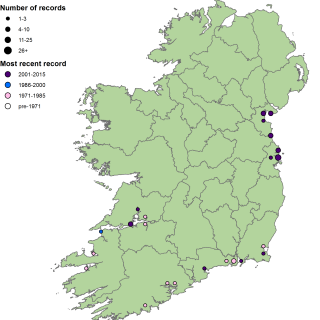 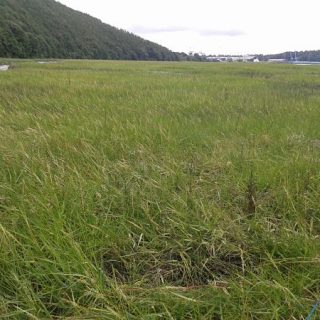 This saltmarsh community is dominated by knee-high swathes of Spartina agg. and at its lowest extent in the marsh profile this will be the only vascular species encountered (mean maximum vegetation height = 55.3 cm, n = 33). Elsewhere, a few stems of Puccinellia maritima are frequently twisting through the cord-grass and as this community merges into the native lower marsh communities, Aster tripolium, Salicornia agg., Atriplex portulacoides and Limonium humile are occasionally encountered. There are often some filamentous algae hanging from the stems and leaves at low tide and macroalgae are fairly frequent; this is mostly Fucus spiralis, but scraps of Ascophyllum nodosum and Ulva lactuca may occur.

This is chiefly a community of lower marsh fringes where it occurs on very soft mud and is regularly inundated. It may form isolated stands out on the mudflats which are discontinuous from the main marsh. Further up the marsh, it occurs on more consolidated substrates and can invade old pans and creeks. It is abundant in many harbours where it was historically planted to stabilise sediments but has now spread further afield. Conditions are base-rich (mean pH = 7.8, n = 33).

This is a distinct community that should not cause confusion.

Stands of this community in Ireland have previously been considered to qualify as EU HD Annex I habitat 1320 Spartina swards. However, as this is a community dominated by an invasive alien plant, the conservation status of the habitat is no longer formally assessed. Where Sarcocornia perennis occurs the vegetation is referable to habitat 1420 Halophilous scrub. This rare species of the southeast is also listed on the Flora Protection Order, 2015. This is invariably a species-poor (species/4 m2 = 4.1, n = 66) community.

This community does not appear to have any significant threats. In areas susceptible to coastal squeeze, sea-level rises will have an impact. There have been efforts made in the past to control the spread of Spartina with herbicide applications, but essentially these swards are currently unmanaged.